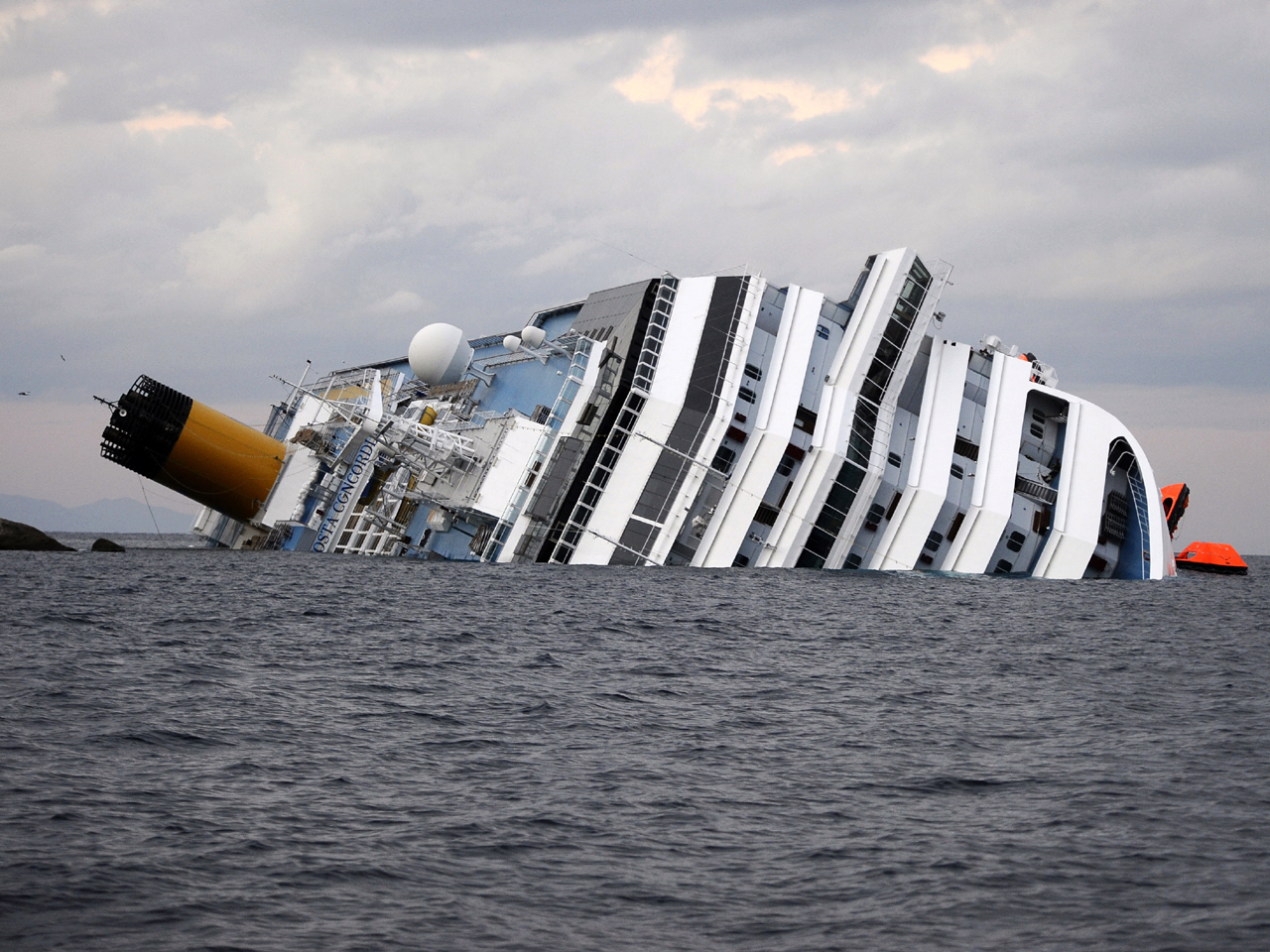 ROME - The jailed captain of the cruise ship that capsized off Tuscany made an unauthorized deviation from the programmed course, a blunder that led to its deadly crash against a reef, the ship's Italian owner said Monday.

Rescue operations were halted temporarily after the Costa Concordia shifted in rough seas and fears mounted that any further shifts could cause some of the 500,000 gallons of fuel on board to leak into the pristine waters off the island of Giglio that are a protected dolphin sanctuary.

The confirmed death toll rose to six after searchers found the body of a male passenger wearing a life vest in the corridor of the above-water portion of the ship. Sixteen people are unaccounted for, including two American passengers.

Cruise ship family: "Pandemonium" on board
Grounded ship may have been too close to shore
Ship disaster raises cruise safety questions

Chances that they would be found alive three days after the ship was speared by the reef and toppled to one side grew slimmer.

The Concordia's captain, Francesco Schettino, was arrested and jailed early Saturday, a few hours after Friday's night shipwreck a few hundred meters off Giglio, a tiny island of fishermen and tourist hotels near the Tuscan coast in west central Italy.

Prosecutors who are investigating the captain for manslaughter, abandoning ship and causing a shipwreck stepped up their scathing criticism of his conduct.

"We are struck by the unscrupulousness of the reckless maneuver that the commander of the Costa Concordia made near the island of Giglio," prosecutor Francesco Verusio told reporters. "It was inexcusable."

A judge on Tuesday is expected to decide if the captain should be charged and remain jailed in Grosseto on the mainland.

Nate and Cary Lukes, who were on the Costa Concordia with their four daughters, describe the "pandemonium" on the ship.

Costa Crociere SpA chairman and CEO Pier Luigi Foschi said the company would provide him legal assistance, but he disassociated Costa from his behavior, saying it broke all rules and regulations.

"Capt. Schettino took an initiative of his own will which is contrary to our written rules of conduct," Foschi said in his first public comments since the grounding.

At a news conference in Genoa, the company's home base, Foschi said that Costa ships have their routes programmed, and alarms go off when they deviate. Those alarms are disabled if the ship's course is manually altered, he said.

"This route was put in correctly upon departure from Civitavecchia," Foschi said, referring to the port outside Rome. "The fact that it left from this course is due solely to a maneuver by the commander that was unapproved, unauthorized and unknown to Costa."

Schettino claims the rock that tore open his ship was not marked on his charts and that he was not too close to shore.

The Italian coast guard says Schettino defied their entreaties for him to return to his ship as the chaotic evacuation of the 4,200 people aboard was in full progress. After the ship's tilt put many life rafts out of service, helicopters had to pluck to safety dozens of people remaining aboard, hours after Schettino was seen leaving the vessel.

Foschi defended the conduct of the crew, while acknowledging that passengers had described a chaotic evacuation where crew members consistently downplayed the seriousness of the situation as the nearly 1,000 foot-long ship lurched to the side.

"All our crew members behaved like heroes. All of them," he said.

He noted that 4,200 people managed to evacuate a lilting ship at night within two hours. In addition, the ship's evacuation procedures had been reviewed last November by an outside firm and port authorities and no faults were found, he said.

Costa owner Carnival Corp. estimated that preliminary losses from having the Concordia out of operation for at least through 2012 would be between $85 million and $95 million, though it said there would be other costs as well.

Why the ship sailed so close to the dangerous reefs and rocks that jut off Giglio's eastern coast is not clear, but there have been suspicions the captain may have ventured too close while carrying out a maneuver to entertain islanders and passengers.

Residents of Giglio said they had never seen the Concordia, which makes a weekly Mediterranean cruise that passes the Tuscan coast, come so close to the dangerous reef area near the southern tip of the island.

Foschi said only once before had the company approved a navigational "fly by" of this sort — last year on the night of Aug. 9-10. In that case, the port and company had approved it.

There are also rising fears that any significant movement could send some 500,000 gallons of fuel into the pristine waters around the island of Giglio, which is a protected sanctuary for dolphins and other sea creatures popular with scuba divers.

Even before the accident there had been mounting calls from environmentalists to restrict passage of large ships in the area.

Costa executive Costa said that the Rotterdam, Netherlands, based Smit, one of the world's biggest salvagers, will try to salvage the 1,000 foot cruise liner and would provide a study by Tuesday on how to extract the fuel.

Smit has a long track record of dealing with wrecks and leaks, including refloating grounded bulk carriers and securing drilling platforms in the aftermath of Hurricane Katrina. A spokesman for Smit, which is part of dredging and maritime services giant Royal Boskalis Westminster NV, did not immediately return calls seeking comment on the Concordia salvage.