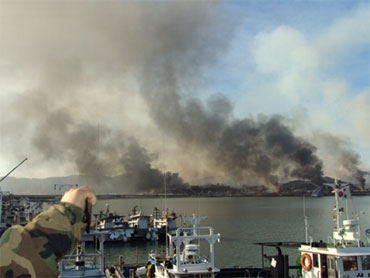 It will take me weeks to go through the three notebooks I filled during my two weeks at the World Series, and to organize the material in a way that makes sense to me and will be useful in preparing for next year. Until then, here is a short report on how it feels now that I have been back in the "real world" for a few days and away from the pressure cooker of the WSOP.

To set the stage, here is what I wrote to you the night that I busted out of the main event:

I played great for two days. Today I got almost nothing to work with for 11 hours. Never a single pocket pair of aces, kings or queens (I did get jacks once, and won a good pot with them). Not even an ace-king.

I made the most of the junk I was dealt. I started the day with $34,725 in chips. At one point I was down to about $20,000. Even without being dealt any good hands, I worked my chip count up to $65,000. But then the constantly increasing blinds and antes really started eating up my stack and I had to capture any and all opportunities to try to "steal" the blinds and antes. In the end, I tried to do that with king-queen and I ran into pocket aces.

Fifteen years ago, when I began working in earnest to become a better poker player, my poker mentor at that time (none other than Chip Miller) helped me to strive for the Zen-like emotional state you must reach in order to play the game seriously without going crazy. Chip was already there fifteen years ago. I am still struggling to get there.

I am talking about an emotional state in which you trust the statistical reality that over the long term everyone gets the same mix of strong and weak hands, and each player's results in the long term depends on how skillfully he or she plays each hand -- how much do you win on your winning hands, and how little do you lose on the losing ones?

Every serious player of the game knows that in his or her head. The challenge is to trust it in your heart, to the point that you do not become so frustrated and angry at the injustice of short-term bad fortune that your game deteriorates, causing you to lose more than you should on the days when the statistical curve is curving away from you.

One of the things I feel best about is that I was able to do that on Sunday. As Day Two of the championship event wore on, time after time after time (roughly 425 times to be precise, based on 45 hands per hour times 9.5 hours of playing time) I picked up either unplayable or marginal hands while other players at my table were showing aces and kings and queens and ace-king.

Still, I was able to channel the frustration into a confident belief that if I just held on long enough, eventually the cards would have to even out and I would be able to accumulate enough chips to make it to Day Three.

The statistical likelihood of not being dealt a single premium hand in 9.5 hours is so low, that I told myself it was going to be sweet when the rush of cards finally came as it would have to in order for the inexorable long run probabilities to hold true.

While waiting for the statistical probability to work itself out, I focused on capturing every opportunity to pick up chips in order to keep the increasing blinds and antes from eating up my stack before the cards turned. As you know, I was very successful in doing that, and actually built up my stack from $34,000 to $65,000 before I ran out of time and luck.

Has my faith in the long run probability been dented? No. And here is why.

After I busted out, and got a good night's sleep, I found myself with 12 hours on my hands before my flight home was due to depart. So I went over to the tournament area to get the final results from the night before and see how my friends had fared.

When I got there, I learned that they were running another $1500 No Limit Hold'Em event on Monday to accommodate players like me who had busted out of the championship event and wanted one more shot at winning a World Series bracelet before going home. So I signed up.

The tournament was not due to start for two more hours, and they were running single table satellites in which ten players each put up $175. The winner got $1,620, enough to pay for the entry into the $1,500 event and tip the dealer. I decided to give it a try.

During the 90 minutes it took to play the satellite Monday morning, I got the rush of cards that had eluded me all day and evening on Sunday. When we got down to three players, one player suggested a three-way deal. I had the most chips, but I am superstitious about such things and I never refuse a reasonable deal in those circumstances. (The one time I did refuse a few years ago, I ended up losing the chip lead and got nothing.) But the third player declined, as he needed to win the whole thing in order to have enough money to buy into the afternoon tournament.

Consistent with my superstition, he busted out and I ended up in a heads-up duel with one other player. I had more than twice as many chips as my opponent. I offered to give him $500 of the total $1,620 and he wisely accepted.

I was pleased with the outcome, but frustrated beyond words that the statistical tide had turned in a $175 satellite instead of the night before during the $10,000 championship event. That is where the cruel injustice of the math comes into play.

Over the long run I will get my share of winning hands. But there is nothing in probability theory or reality that says I will get them when it matters the most. Running bad at critical times in big money situations, and running good in small stakes home games, is not statistically neutral in my book.

If I were 25 years old and could count on playing my A-game in the championship event at the World Series 40 more times, I might feel differently. But at age 59, I don't know whether I will have enough opportunities for the "long run" to even out, in terms of when the cards come. That is where short-term luck really makes the difference.

As if to underline the point, consider the case of Greg Raymer, last year's winner of the championship event (and the $5 million first prize money). He was the chip leader going into Day Four yesterday with $1.06 million in chips. By 5:00 pm he had increased his stack to $1.75 million. At 5:25 a player named Wattanabe went all in with a pair of jacks. Raymer called with eight-six. The flop was seven-three-two, all spades. Wattanabe was a huge favorite to win the hand. In addition to having a high pair, he also had the jack of spades and would make a flush if any spade came. On 4th street the dealer brought a five, giving Raymer a straight draw. On 5th street Raymer made his straight with a red nine, eliminating Wattanabe from the tournament.

Greg built his stack further when he had ace-king and his opponent had king-ten. The flop came king-king-three. His opponent moved all in and Greg busted him.

But then Greg got unlucky. At 8:00 pm his opponent caught a miracle straight on the river (just as Greg had against Wattanabe), and Greg's stack was down to $700,000. An hour later he had a pair of sixes and flopped three sixes when the flop came queen-jack-six. He won a big pot and was back up to $1.3 million.

He maintained his chips at that level until 1:00 a.m. Then he flopped top pair when a queen came on the flop, matching the king-queen in his hand. Unfortunately for Greg, another player had ace-queen, and when the dust settled Greg was down to $766,000. That is where he finished the day, in 31st place out of 58 remaining players.

What you see in this chronicle of Greg Raymer's Day Four experience is a normal fluctuation of cards and fortune. He got lucky once to win a big pot with the worst hand, and got unlucky when the worst hand beat him in a bit pot. He got lucky when his opponent flopped top pair holding king-ten and bet all his chips, at a time when Greg had him out-kicked with ace-king. Then he got unlucky and lost a lot of chips when he flopped top pair holding king-queen and ran into ace-queen.

I never experienced that sort of normal fluctuation on Day Two. In two days of play I never flopped a set when I held a small pair (as when a six came on the flop in the hand where Greg held a pair of sixes).

Instead, all of the winning situations came for me on Monday morning in the $175 single table satellite, too late to help me make it into the money in the championship event.

I had occasion on Day One to play at the same table with Tiffany Williamson, a British woman I have never encountered or read about before on the tournament circuit. She arrived at my table with a big stack. Another player who had been at her previous table told me she won most of them when she outdrew an opponent who had a superior hand, catching a miracle straight card on the river.

She seemed to be a solid player while at our table, and held onto most of the chips she brought from her previous table. I did not see her on Day Two, as we were assigned to different tables.

This morning I noticed that she finished Day Four in 7th place, with $2 million in chips -- nearly three times what Greg Raymer ended with. In a key hand, around midnight last night, she moved all in for $1 million holding ace-queen. She was quickly called by a player who had a bigger stack than hers. He had a pair of kings. Two of the players who had folded their hands said their hands had contained an ace. That meant there was only one card in the deck -- the lone remaining ace -- that could beat the other player's pocket kings. The first card off the deck was an ace, as the flop came ace-jack-six. Tiffany doubled up to $2 million.

Maybe next year it will be my turn to walk in Tiffany's or Greg's shoes. That fantasy will keep me going for the next 12 months. In the meantime, I will continue to practice by playing tournaments and single table satellites online, and I will have a chance for the statistical curve to curve my way in November at Foxwoods and in January at Atlantis -- the next two circuit events I will have the opportunity to play in.

But running well in a $20 online event just doesn't compensate for running badly in the World Series championship event. So, as I said in an earlier report, Chip Miller can show me all the mathematical proofs he wants -- my reality is that the poker gods are fickle.
By Ken Adams