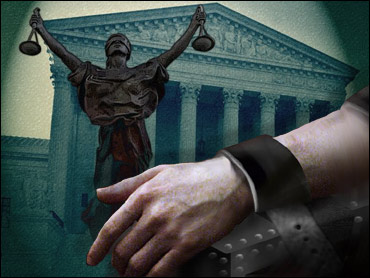 This column from The American Prospect was written by Sasha Abramsky.

On Tuesday, March 1, the U.S. Supreme Court issued an opinion in the much-watched Roper v. Simmons case on the permissibility of states' use of the death penalty against juvenile offenders.

Roper v. Simmons came out of Missouri and involved the vicious saga of Christopher Simmons, a man who, at the age of 17, boasted that he was planning to kill someone, then led a group of friends in kidnapping and murdering a female neighbor. Simmons was sentenced to death and has spent the early years of his adulthood on death row. When his case reached the Missouri Supreme Court, the jurists there overturned the sentence, ruling that the juvenile death penalty should, in the wake of evolving communal standards of decency, now be viewed as a cruel and unusual punishment, and thus stand in violation of the Eighth Amendment.

Missouri appealed the ruling up to the U.S. Supreme Court, and it was here that the battle was really joined. Fifty child-advocacy organizations filed amicus briefs urging the justices to rule the practice unconstitutional. An array of internationally known political figures -- including the Dalai Lama and former Presidents Jimmy Carter of the United States, Mikhail Gorbachev of the Soviet Union, and F.W. de Klerk of South Africa -- also called for the abolition of the juvenile death penalty. And various international treaties and legal developments were cited as objections to the ongoing use of capital punishment against those under 18 at the time of their crimes.

Tuesday's opinion, supported by five of the nine justices, reversed the Supreme Court's own decision in the 1989 Stanford v. Kentucky case and sided with the judges in Missouri in declaring capital punishment for juvenile offenders to now be unconstitutional.

"Rejection of the imposition of the death penalty on juvenile offenders under 18 is required by the Eighth Amendment … . Once juveniles' diminished culpability is recognized, it is evident that neither of the two penological justifications for the death penalty -- retribution and deterrence of capital crimes by prospective offenders -- provides adequate justification for imposing that penalty on juveniles," wrote Justice Anthony Kennedy for the majority. "When a juvenile commits a heinous crime, the State can exact forfeiture of some of the most basic liberties, but the State cannot extinguish his life and his potential to attain a mature understanding of his own humanity." Kennedy was joined in his opinion by Justices John Paul Stevens, David Souter, Ruth Bader Ginsburg, and Stephen Breyer.

In many ways, the ruling was more about symbolism than about the nasty realities of capital punishment. Of the thousands of people handed death sentences since the practice was reinstated by the Supreme Court in 1976, only a fraction have been juveniles. Nationwide, the ruling will remove only 72 people, 29 of them from Texas, from death rows and place them in regular prisons, where they will now serve out life sentences. And of the hundreds actually executed, a mere handful were juveniles at the time of their offense. In fact, over the past decade, only Texas, Virginia, and Oklahoma have carried out such executions.

Yet, despite this, Kennedy's opinion will have enormous ramifications. First, in acknowledging the influence of international opinion and international legal norms, the ruling may well open the door to a host of Eighth Amendment challenges to practices condoned by the U.S. legal and prison systems yet practiced in few other democratic nations. International opinion, wrote Kennedy, in language that particularly irritated three of the four dissenting justices (William Rehnquist, Antonin Scalia, and Clarence Thomas), "is not controlling here, but provides respected and significant confirmation for the Court's determination that the penalty is disproportionate punishment for offenders under 18."

Second, in further limiting eligibility for the death penalty, the opinion builds on previous Supreme Court opinions and other recent developments and may ultimately lay the groundwork for a more across-the-board challenge to capital punishment. In 2002, in the Atkins v. Virginia case, the U.S. Supreme Court ruled unconstitutional the practice of executing mentally retarded individuals. In 2000, Illinois' then-Governor, George Ryan declared a death-penalty moratorium, and in 2003 he commuted all existing death sentences in his state. Nationally, meanwhile, much attention has been focused on the problem of capital defendants being represented by chronically underfunded -- and often inept -- attorneys, and on the risk of innocents ending up wrongfully sentenced to death. Simmons puts a further dent in the pro-death-penalty position.

In a statement released by the Juvenile Law Center, a nonprofit children's-rights organization, Seth Waxman, the attorney who argued the Simmons case before the Supreme Court last October, expressed his delight "that the U.S. has joined the rest of the world in outlawing the death penalty for juveniles. This ruling affirms the position held by nearly all major national religious denominations, medical and psychological associations, and child and civil-rights advocacy groups -- all of which have concluded that, as applied to juveniles under the age of 18, the death penalty punishment is both cruel and unusual."

"It's a great step in the advancement of human rights," says Texas attorney Walter Long, who represented Napoleon Beazley, a high-profile teenage killer who was eventually executed by Texas, and whose current clients include Nanon Williams, another juvenile offender residing on Texas' death row.

Richard Dieter, executive director of the Washington, D.C.-based Death Penalty Information Center, goes further. "It continues the review of the death penalty, which has been more restricted lately," he explains. "Courts have taken on the issue of the death penalty."

Sasha Abramsky is the author of Hard Times Blues and an upcoming book on voting rights, which will be published by The New Press in 2006.