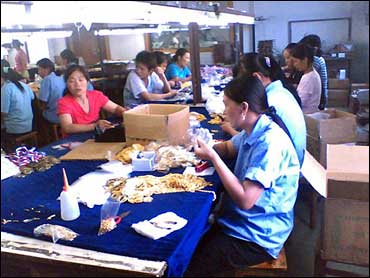 A labor rights group alleged Tuesday that crucifixes sold in religious gift shops in the U.S. are produced under "horrific" conditions in a Chinese factory with more than 15-hour work days and inadequate food.

"It's a throwback to the worst of the garment sweatshops 10, 20 years ago," said Charles Kernaghan, director of the National Labor Committee.

Kernaghan held a news conference in front of St. Patrick's Cathedral to call attention to conditions at a factory in Dongguan, a southern Chinese city near Hong Kong, where he said crosses sold at the historic church and elsewhere are made.

Spokespeople for St. Patrick's and another New York landmark, the Episcopal Trinity Church at Wall Street, said the churches had removed dozens of crucifixes from their shops while they investigate the claims.

"I don't think they have a clue where these crucifixes were made - in horrific work conditions," Kernaghan said.

Kernaghan said the factory's mostly young, female employees work from 8 a.m. to 11:30 p.m. seven days a week and are paid 26 cents an hour with no sick days or vacation. Workers live in filthy dormitories and are fed a watery "slop."

Kernaghan said factory workers took photos and smuggled out documents detailing practices there. While none of the crucifixes sold in New York were identified as made in China, they bore serial numbers matching products made at the factory in question, Kernaghan said.

Bill Anderson, president of the Association for Christian Retail, a trade group, said in a statement yesterday that Mr. Kernaghan's claims about manufacture of religious items overseas were "unfounded and irresponsible." He said the group has never received concrete proof that items sold by its members were manufactured in sweatshops. In fact, he said, the organization's members make regular trips to overseas factories to "ensure quality control as well as inspect working conditions," reports the New York Times.

Joe Zwilling, a spokesman for St. Patrick's, said church officials had not heard about the issue before Tuesday. Trinity spokeswoman Diane Reed said her church had been "under the impression that these were mass-produced in Italy."

St. Patrick's and Trinity bought the crosses from the Singer Co., a religious goods company based in suburban Mount Vernon. Co-owner Gerald Singer said the religious objects were made in China and purchased through a Chinese manufacturer called Full Start.

"Whether they came out of a sweatshop, we do not know," Singer said. "We asked Full Start to sign off that there are no sweatshop conditions involved, and no children and that they abide by Chinese law. This is a black eye for us."

An after-hours call to a U.S. office of Full Start Ltd. in East Providence, R.I., was not immediately returned Tuesday.

A man at the Full Start factory in Dongguan said the allegations were "totally incorrect."

The working conditions at the factory were "fine," said the man, who refused to give his name. The 200-plus employees work from 8 a.m. to 5:30 p.m. each day, with an hour and a half break for lunch, he said.

The employees were rarely asked to work overtime, but were compensated when they did, he said. When pressed for more details, the man said he wasn't in charge of those issues and hung up the phone.

Kernaghan said the crosses were exhibited at an annual trade show organized by the Association for Christian Retail, a Colorado-based trade association that works with thousands of religious stores across the country.

Bill Anderson, president and chief executive of the Christian trade association, issued a statement saying: "While we occasionally hear this issue raised, and believe there are factories in China where human rights are violated, we believe claims that products sold through CBA member stores are made in these shops are irresponsible and unfounded."

Dongguan lies at the center of China's export manufacturing industry, which relies heavily on low wages to remain competitive. Factories there have been accused in the past of labor abuses, including those making products for McDonald's, Disney, Mattel and the Beijing Olympics.