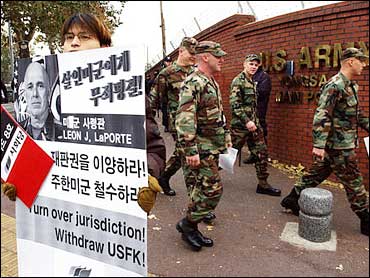 Dozens of demonstrators broke into a U.S. military base Tuesday to protest last week's acquittals of two American soldiers involved in the deaths of two Korean girls.

Some 50 protesters entered Camp Red Cloud, north of Seoul, by cutting through a wire fence on a hillside, said Lt. Col. Steven Boylan, a spokesman for the 8th U.S. Army.

Boylan said the activists chained themselves together and marched inside the base toward the front gate shouting "U.S. troops out of Korea!"

There were no clashes between the intruders and American soldiers, he said. The protesters were apprehended by South Korean police.

The protesters, mostly students, are being questioned at several police stations, said a police official in Uijongbu, on the northern outskirts of Seoul.

Last week, Sgt. Fernando Nino and Sgt. Mark Walker were acquitted of negligent homicide charges in the deaths of the two 13-year-old school girls, who were hit June 13 by the soldiers' armored vehicle.

The acquittals prompted an outcry from South Korean activists, who called the trials a sham.

Later Tuesday, South Korean President Kim Dae-jung warned of "stern measures" against violent protests, referring to a demonstration Monday during which students hurled firebombs into a U.S. military base in Seoul.

The U.S. military, in a news release, said: "Although the procedures followed in the courts martial were consistent with our longstanding and widely accepted U.S. military judicial process, it is clear that the process is not clearly understood by many in the Korean process."

Walker and Nino, who belong to the 2nd U.S. Infantry Division, were on a training mission when their vehicle struck the girls on a narrow rural road.

Since the soldiers' acquittals, South Korean political parties have called for revising a U.S.-South Korean military accord to give South Korean more jurisdiction in cases involving U.S. soldiers.

The U.S. military, however, said 82 percent of crimes committed by its personnel this year had been subject to South Korean jurisdiction.

Currently, the U.S. military has jurisdictional rights over American soldiers accused of crimes while on duty, though it can allow South Korea to try them on a case-by-case basis.

About 37,000 American soldiers are based in South Korea as a deterrent against communist North Korea.