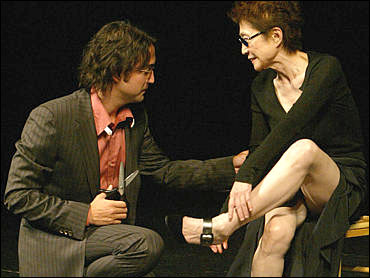 ; Yoko Ono performed her legendary 1960s "Cut Piece" Monday, inviting the audience to cut off her clothing with scissors in the name of world peace.

The 70-year-old avant-garde icon sat in a chair on stage alone at Paris' intimate Ranelagh theater and asked that each member of the audience silently cut off a piece of her clothing and send it to a loved one.

One by one, the 200 audience members filed onstage and snipped away pieces of Ono's outfit — a long black silk skirt with matching long-sleeved top. Among them was Ono's 27-year-old son, Sean Lennon.

At the end of the one-hour event, the Japanese-born artist was left seated in her black undergarments until an aide came onstage with a robe.

"I was just here to say imagine world peace, and to say I love you," Ono told Associated Press Television News in an exclusive interview after the show. "Let's create a peaceful world. I'm hoping these things will help."

The appearance repeats Ono's 1964 performance in Japan, which captivated the media and art critics at the time for its boldness. She also performed "Cut Piece" at New York's Carnegie Hall in 1965.

It was well before she and the late Beatles' star John Lennon became a couple — they met in 1966 and married in 1969.

"Following the political changes through the year after 9/11, I felt terribly vulnerable — like the most delicate wind could bring me tears," Ono wrote in a presentation for the show. "Cut Piece is my hope for world peace."

By allowing strangers to approach her with scissors, Ono said she hoped to show that this is "a time where we need to trust each other."

Spectators walked away saying the message was clear.

"Scissors usually have a violent connotation, but she turns it around to make it peaceful," said Katherine Williams, an 18-year-old Californian studying in Paris. "I think that's what she's saying — you can make peace out of violence."