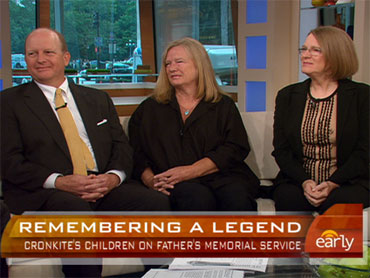 The legacy of Walter Cronkite will live on not only in journalism, but the lives and work of his children.

On "The Early Show" Wednesday, Cronkite's children "Chip," Nancy and Kathy Cronkite shared thoughts on their father and the memorial service for him Wednesday.

Kathy said the flood of response since their father's passing has been "huge."

She said, "I'm not sure there is a way to put it in words except that I think for my whole life, it's been hard for me to get who he was to other people really. You know, he was dad. And this has been a really big dose of, 'Oh my gosh, there will be thousands of people there to honor him.'"

President Barack Obama and the former President Bill Clinton will join some of the biggest names in broadcast journalism at Cronkite's memorial service at New York City's Lincoln Center.

Nancy said her father will be remembered for his dedication to journalism's role in a democracy, so voters can cast informed votes at the polls, and that people got the facts and the objective truth.

But what was it like being the "most trusted man in America"'s child?

Kathy said it was "fun."

She said both of her parents had a fun streak.

"They had a great sense of play and of life as an adventure. And I remember we'd get lost driving in a car, and it would be an adventure. It was a very fun household. There was dancing and laughing and music."

The Walter and Betsy Cronkite Fund

To watch more of the interview with Cronkite's children, click on the video below.