New York (CBS) The year was 1972. Two young reporters from the Washington Post were on the trail of one the most explosive stories in decades. Watergate. But it was Walter Cronkite who brought the revelations and latest details of the scandal to the national television audience.

With his steady and straightforward delivery, and millions of viewers tuned in at home, "the most trusted man in America" gave legitimacy to, what was then a developing story, that ultimately resulted in the indictment and conviction of several of President Richard Nixon's closest advisors, and in the resignation of the President himself.

CBS News presented a two-part, 22 minute, overview of the Watergate scandal in October 1972. The first was segment was 14 minutes, the second was eight. The reports are now credited with keeping the story alive and served as a turning point in a case that came to grip America.

"The fact that Cronkite did Watergate at all gave the story a kind of blessing, which is exactly what we needed," wrote Ben Bradlee, Washington Post editor during the Watergate era, in Newsweek last Friday. "You could feel the change overnight... A little more than a week after the Cronkite broadcast, Nixon decisively won his reelection campaign. But those of us following the story felt it. Washington people, people who followed national stories—a lot of them who had not decided that we were right changed their minds because of Walter." 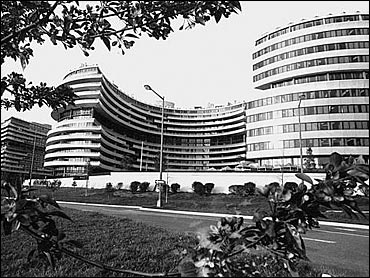 (AP)
Democratic National Committee office in the Watergate complex in Washington on April 20, 1973.

Bradlee said that it was Cronkite that made heroes of reporters Bob Woodward and Carl Bernstein, who helped break the story for the Post.

The story netted Cronkite an Emmy for his coverage, an award that he was said to have valued most out of all the others. "That's the big doozy," he said of the award to one friend.

He will be missed.