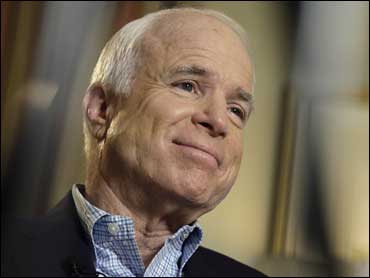 This story was written by Jim VandeHei and Mike Allen..


Senator John McCain (R-Ariz.) said "Iraq" when he apparently meant "Afghanistan" on Monday, adding to a string of mixed-up word choices that is giving ammunition to the opposition.

Just in the past three weeks, McCain has mixed up Iraq and Afghanistan, Somalia and Sudan, and even football's Packers and Steelers.

Ironically, the errors have been concentrated in what should be his area of expertise - foreign affairs.

McCain will turn 72 the day after Sen. Barack Obama (D-Ill.) accepts his party's nomination for president, calling new attention to the sensitive issue of McCain's advanced age, three days before the start of his own convention.

The McCain campaign says Obama has had plenty of flubs of his own, including a reference to "57 states" and a string of misstated place names during the primaries that Republicans gleefully sent around as YouTubes.

But the mistakes raise a serious, if uncomfortable question: Are the gaffes the result of his age? And what could that mean in the Oval Office?

Voters, thinking about their own relatives, can be expected to scrutinize McCain's debate performances for signs of slippage.

Every voter has a parent, grandparent or a friend whose mental acuity slipped as they grew older. It happens at different times for different people - and there is ample evidence many in their 70s are sharp and fit as ever. There is also ample evidence others do start to slip at that age.

In McCain's case, his medical records, public appearances and travel schedule have suggested he remains at the top of his game.

But his liberal critics have been pouncing on every misstatement as a sign that he's an old man.

Already, late-night comics have made McCain's age an almost nightly topic, with CBS's David Letterman getting a laugh just about any time he says the word "McCain" and "nap" in the same sentence.

Last week, McCain tried to defuse the issue by pretending to doze off during an appearance with NBC's Conan O'Brien.

Republicans would like to make the case that McCain is seasoned and Obama is a callow newcomer to the public stage. But that'll be harder if he keeps up the verbal slips, which make it easier for comedians and critics to pile on.

"FIRST GAFFE OF OBAMA TRIP......GOES TO MCCAIN," blared Monday afternoon's banner headline on the left-leaning Huffington Post, accompanied by a photo of McCain appearing to slap his forehead.

That referred to an ABCNews.com posting asserting that McCain appeared to "confuse Iraq and Afghanistan, in a "Good Morning America" interview with ABC's Diane Sawyer, who asked whether the "the situation in Afghanistan is precarious and urgent."

McCain responded: "I'm afraid it's a very hard struggle, particularly given the situation on the Iraq/Pakistan border," McCain said. The ABC posting added: "Iraq and Pakistan do not share a border. Afghanistan and Pakistan do."

Unfortunately for McCain, that wasn't an isolated slip. Among the other lapses:

-"Somalia" for "Sudan" - As recounted in a reporter's pool report from McCain's Straight Talk Express bus on June 30, the senator said while discussing Darfur, a region of Sudan: "How can we bring pressure on the government of Somalia?"

-"Germany" for "Russia" - A YouTube clip from last year memorializes McCain referring to Vladimir Putin of Russia - following a trip to Germany - as "President Putin of Germany."

-This spring, McCain said troops in Iraq were "down to pre-surge levels" when in fact there were 20,000 more troops than when the surge policy began.

-In Phoenix earlier this month, McCain referred to "Czechoslovakia," which has been divided since Jan. 1, 1993, into the Czech Republic and Slovakia. He also referred to Czechoslovakia during a debate in November and a radio show in April.

-In perhaps the most curious incident, McCain said earlier this month that as a prisoner of war in Vietnam, he had tried to confuse his captors by giving the names of Pittsburgh Steelers starting players when asked to identify his squadron mates. McCain has told the story many times over the years - but had always referred correctly to the names he gave as members of the Green Bay Packers.
By Jim VandeHei and Mike Allen