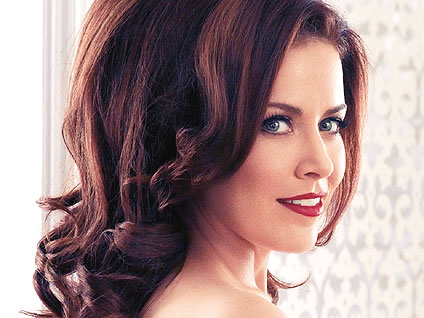 The actress, who plays switchboard operator Lois Sadler on "Mad Men," is heating things up in the pages of Playboy Magazine's August edition, just as her role resumes on the AMC original series this Sunday.

Flanagan, 34, is recreating classic looks of the 1960s in her latest spread for Playboy and she's no stranger to recreations. Her cover shot in just panties and a necktie (imitating 1960s Playboy pin-up Toni Lacey) was something she found easy to do, given her experience in character acting on "Mad Men."

"I really did feel like I was re-creating something and that I was bringing to life these women who already posed for Playboy in the '60s," Flanagan told Playboy. "If I tell a friend I did this, they think I'm completely naked. ... This was not Crista filling your wish list out. This was trying to capture an era."

The period drama "Mad Men" is known for weaving itself around actual historical events. So for Flanagan to weave herself in and out of various clothing depicting vintage Playboy models of the 1960s wasn't too much of a stretch.