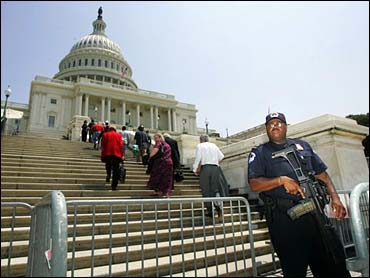 A security scare in the nation's capital served as a mostly successful terror alert test after authorities diverted a small plane that flew within three miles of the White House and led to the frantic evacuation of thousands of people.

However, CBS News Senior White House Correspondent Bill Plante reports that critics either called the response an overreaction or asked why officials waited so long to take action.

Alert levels at the White House and Capitol were raised to their highest state, red, on Wednesday when a Cessna 152 crossed into restricted air space and failed to respond to a Homeland Security helicopter scrambled to stop it. Military jets fired four warning flares at the single-engine aircraft, which was carrying a pilot and a student pilot flying from Pennsylvania to North Carolina, before it turned away from the national landmarks.

The plane appeared to be "on a straight-in shot toward the center of the Washington area," Capitol Police Chief Terrance W. Gainer said.

CBS News Correspondent Bob Orr reports that air traffic officials say, despite the elevated warning level on the Hill, they never viewed the Cessna as a real threat. For one thing, it was detected nearly a half-hour before the evacuation was ordered. Some officials told him that a plane as small as a Cessna could not cause significant damage or injuries.

The scare, which lasted about 45 minutes, sparked a frenzy of activity that tested the capital's post-Sept. 11 response system. Homeland Security officials said smooth coordination among a handful of federal agencies to share information and quickly scramble warplanes showed the defense system worked as designed.

There was one notable exception: Mayor Anthony Williams said city officials weren't told about the threat until the all-clear was sounded, more than 10 minutes after the White House and Capitol were evacuated. A city government building that houses the mayoral and District of Columbia Council offices, located two blocks from the White House, was not evacuated.

While praising the fast federal response, experts said the alarm highlighted security measures that still need to be put in place.

David Heyman, homeland security director at the Center for Strategic and International Studies in Washington, said more needs to be done to prevent unauthorized flights and protect restricted airspace from violations like Wednesday's.

"The scare today reminds us both of the challenges we still face in securing our nation's skies as well as the significant steps we've taken to protect against future attacks," Heyman said.

The incident began at 11:28 a.m. when Federal Aviation Administration radar picked up the small, two-seater aircraft. Gainer said the first alert went out when the plane was 21 miles — about 17 minutes flying time — from the city.

One Black Hawk helicopter and one Cessna Citation jet, assigned to the U.S. Customs and Border Protection, were dispatched at 11:47 a.m. from Reagan National Airport. Authorities said the Citation established communication with the Cessna's pilot around 12:06 p.m. as two F-16 jet fighters moved in. The jets, scrambled from Andrews Air Force Base in Maryland, fired four warning flares before the plane turned away.

"If he wouldn't have responded, intentionally or not, he could have been shot down," said Master Sgt. John Tomassi of the North American Aerospace Defense Command in Colorado Springs, Colo.

CBS News Chief White House Correspondent John Roberts reports that the pilots of the fighter jets never requested authority to shoot down the small plane. If they would have, it might have been a difficult decision for authorities due to the congestion of the urban area below.

The plane then turned to the west and the warplanes escorted it to the airport in Frederick, Md., where the men aboard were taken into custody shortly after 12:38 p.m. The government decided not to press charges after interviewing the men and determining the incident was an accident.

"They were navigating by sight and were lost," Justice Department spokesman Kevin Madden said. The men were identified as Hayden Sheaffer of Lititz, Pa., and Troy Martin of Akron, Pa., who were on their way to an air show in Lumberton, N.C.

"I think it's fairly obvious they had no idea that they were headed for that air space," said Jack Henderson, a pilot and a friend of the two men, on CBS News' The Early Show.

Even though no charges will be filed, the FAA may take action on their pilot licenses, Plante reports.

Homeland Security officials said the alarm marked the first time the public has been told that terror alert levels were raised to red.

At the White House, the Secret Service raised the alert level to red for eight minutes, starting at 12:03 p.m., as the Cessna moved within 10 miles, presidential spokesman Scott McClellan said.

President Bush, biking with a high school friend at the Patuxent Wildlife Research Center in Beltsville, Md., was unaware of the midday scare as it was occurring. His security detail knew of the raised threat level.

Capitol Police put the Capitol on red alert at 12:04 p.m. Lawmakers, tourists and reporters raced out of the building, dodging the speeding motorcades of Latin American leaders who had been meeting with members of Congress.

Armed security officers raced through the Capitol shouting for people to leave. "This is not a drill!" some yelled as they moved people away from the building. Another warned: "There's a plane coming."

Plante described his experience trying to go into the Capitol four minutes before he saw people rushing out of the building. He said two minutes before noon, a guard told him, "Can't come in. We're closed."

"It really brings you back to that awful moment of 9/11," Plante said. "But it didn't take long to figure out that this was probably a false alarm when nothing much happened."