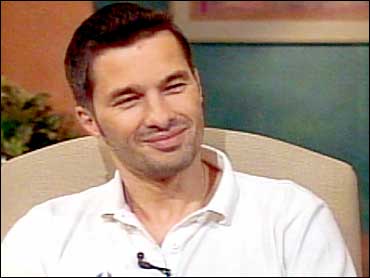 Although he's been making movies in his native France for over a decade, Olivier Martinez is best known to American audiences for playing the charming French book dealer who seduced Diane Lane and sent millions of female hearts racing in "Unfaithful."

Now, he's back in theaters, playing an imprisoned drug lord who will pay a high price to get out of jail in the current No. 1 film, "S.W.A.T."

Martinez tells The Early Show co-anchor Rene Syler, "I wanted to be 'S.W.A.T.' and they said, 'No,' so I became the bad guy."

In the film, a newly-formed S.W.A.T team has to prove it is one of the best law enforcement teams in Los Angeles. One of its first missions is to make sure a notorious drug lord, Alex Montel (Martinez), remains in custody. But the task, they discover, is extremely difficult because Montel offers a $100 million bounty to anyone who can free him from police custody.

The S.W.A.T. team, led by Sgt. "Hondo" Harrelson (Samuel L. Jackson), tries to escort the kingpin out of Los Angeles and into the hands of the Feds, as mercenaries pursue them.

Working with Jackson, Farrell and LL Cool J. was great, says Martinez. "I mean first time I met them, I did not know exactly what was going to happen. I was not so sure about it. And I started to talk with Clark (director Clark Johnson), telling me who would be in the movie. I said, 'OK.'"

Martinez may seem like a natural actor to some fans, but he didn't choose the career until after performing numerous other jobs — including boxing — for about five years. He made his motion picture debut in 1992's "Jean Jacques Beineix' IP5."

In 1994, he received the Cesar Award for Most Promising Young Actor for his work in Bertrand Blier's drama "1, 2, 3 Sun."

Martinez first gained international attention for his performance in 1995's "Horseman on the Roof." His credits also include 1997's "The Chambermaid on the Titanic," Julian Schnabel's critically acclaimed 2000's "Before Night Falls" and "Toreros" — to name a few.

A private person, Martinez did not want to comment on his romance with Australian actress Kylie Minogue.

He says, "I think it's bad for an actor to become so public. For me, I want people to look at my work. I try to be as good as possible and I work very hard to be convincing to the world. I don't want to have a mix-up with my life. I am here to talk about my acting and the people that I'm working with and not the people who I'm being with."