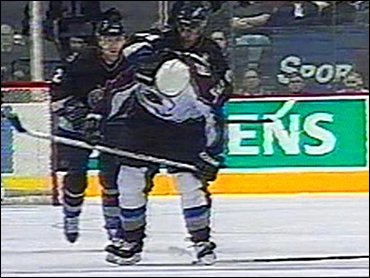 The charges were announced by the criminal justice branch of the Ministry of the Attorney General.

The attack in the National Hockey League Game on March 8 in Vancouver left Moore had a broken neck and cuts on his face.

Bertuzzi punched Moore in the back of the head and fell on top of him, drawing a suspension by the NHL for the rest of the season, including the playoffs. He also must meet with league officials before being reinstated next season.

The incident was witnessed by over 18,000 people at the arena and has been shown repeatedly in television clips broadcast across North America and Europe.

An All Star last season and this season, Bertuzzi has been ordered to appear in provincial court July 9. The Canucks were also fined $250,000 for Bertuzzi's brutal hit.

Moore is still listed on the Avalanche roster.

Days after the hit, Bertuzzi delivered an emotional apology to Moore.

"I had no intention of hurting you," Bertuzzi said Wednesday night, reading a statement before the Canucks played the Minnesota Wild at Vancouver.

"I feel awful for what transpired," he said, choking up.

The punch appeared to be retaliation for an open-ice hit Moore delivered to Canucks captain Markus Naslund last month, knocking him out for three games.

In 2000, former Boston Bruin Marty McSorley was charged for hitting then-Vancouver Canuck Donald Brashear with his stick. McSorley was convicted of assault with a weapon, but he received an 18-month conditional discharge, meaning no jail time and no criminal record after probation.

The league suspended him for a year, ending his 17-year NHL career.