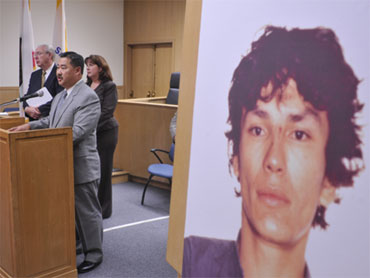 NEW YORK (CBS) His name was Richard "Ricky" Ramirez, but the nation knew him as "The Night Stalker," a silent menace who cut window screens and crept into homes at night to murder more than a dozen people in California.

Ramirez, 49, is being held on death row at San Quentin State Prison after being convicted in 1989 in Los Angeles of 13 murders. His body count is likely going to grow, now that he's been linked by DNA to the 1984 murder of a 9-year-old San Francisco girl.

In 1989, I found myself face to face with Ramirez in a Los Angeles courtroom. I raised my right hand and swore to tell the truth about my small connection to the case. As I answered the prosecutor's questions, I remember nervously glancing over a few times at Ramirez, who sat completely still, hidden behind large sunglasses. He scared me; I was already nervous about testifying in a criminal trial, and he seemed to give off what I can only describe as an "evil" vibe. I decided it was best not to look at him.

My involvement in the case began in 1985, when I was a reporter for the El Paso Times in Texas. After Ramirez was captured in Los Angeles, the news broke that he was originally from El Paso. The chase was on, and El Paso was soon swarming with reporters seeking details about his early life. When I got a lead on a possible address of Ramirez' family, a television crew in our newsroom tried to follow my car -- until I pulled a sharp u-turn into a parking garage and lost them!

That address didn't pan out, but another one did; and later that day I was the first reporter to speak with Ramirez's family. His father hesitantly told me in Spanish that he hadn't seen his son in several years. He said he didn't know if his son had committed the murders, but blamed his son's criminal problems on drugs.

Four years later, I was working at The Miami Herald when the lead prosecutor on the case hunted me down and asked if I would be willing to testify about my interview with Ramirez' father. It seemed that the father was now saying that his son had been in El Paso getting dental work during the time when one of the murders was committed -- in contradiction to his statement to me that he had not seen Ramirez for several years.

I was initially reluctant to get involved in the matter. It's a general rule that reporters don't testify about the things they're told unless there's a compelling reason. I told the prosecutor it was possible the father had lied to me, although I didn't believe it. I remember I asked him if my testimony was really important or just "icing on the cake." He assured me it was important.

My city editor in Miami didn't think it was a good idea, but said it was up to me. My ultimate thinking was that even though I was a reporter, I was also a citizen. I believed that Ramirez was a monster and that if I could do something to make sure he was convicted, then it was acceptable to do so.

Also, in this case, I was not revealing anything that wasn't already in my El Paso Times article in 1985, but merely reaffirming it -- or at least what the father had said to me at that time.

So I flew out and testified, adding my little grain of sand to the immense, year-long case against Ramirez. I think it was okay for me to have done it, but I do know that my city editor was cool to me from then on, for the remainder of our professional time together.

Public citizen or grandstander reliving his big scoop? You decide.