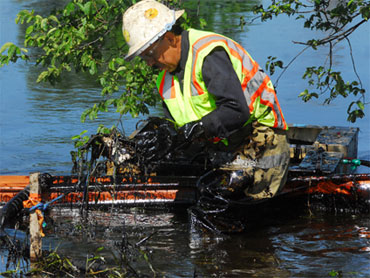 Federal officials believe an oil spill that has contaminated a major Michigan river was larger than first estimated, and the governor is warning of a "tragedy of historic proportions" should the oil reach Lake Michigan some 80 miles away, and the vacation communities that depend on it.

The Environmental Protection Agency, which has taken control of efforts to contain and clean up the Kalamazoo River spill, said late Wednesday that it believes more than 1 million gallons of oil leaked from a pipeline into Talmadge Creek, which feeds the river. Enbridge Inc., the Canadian company that oversees the pipeline, had estimated that 819,000 gallons spilled Monday before they could stop the leak.

By late Wednesday, the oil had traveled at least 35 miles downstream from where it leaked in Calhoun County's Marshall Township, killing fish, coating other wildlife and emitting a strong, unpleasant odor. It had passed through Battle Creek, a city of 52,000 residents about 110 miles west of Detroit, and was headed toward Morrow Lake, a key point near a Superfund site upstream of Kalamazoo, the largest city in the region.

State and company officials had said earlier this week they didn't believe the oil would spread past a dam at the lake, and that they would be able to contain it there.

But Tom Sands, the deputy state director for emergency management and homeland security, said during a conference call with Granholm on Wednesday that he had seen oil that had made it past the dam while he was flying over the area.

On Thursday, EPA spokesman Mick Hans said its incident commander was in the same plane as Sands and wasn't convinced oil had passed the dam. Hans said the EPA, however, wasn't trying to take issue with the report.

"We're all working together," Hans said. "Sometimes you get different technical interpretations."

The company's latest update statement Wednesday said oil was about seven miles short of the opening to Morrow Lake.

Granholm on Wednesday called on the federal government for more help, saying resources being marshaled by the EPA and Enbridge were "wholly inadequate."

The Calgary, Alberta-based company said Wednesday and Thursday that it was ramping up its efforts to contain and clean up the mess. Chief executive Patrick D. Daniel said the company had made "significant progress," though he had no update on a possible cause, cost or timeframe for the cleanup.

Workers and contractors were using vacuum trucks and absorbent booms to contain and clean the spill, and the company was bringing in more help, Enbridge spokeswoman Lorraine Grymala said Thursday.

"We're getting them here as quickly as we can," Grymala said.

The spill has killed fish and coated wildlife. Both company and EPA officials have said oil is no longer leaking, but the spill's size was considerable. An 800,000 gallon spill would be enough to fill 1-gallon jugs lined side by side for nearly 70 miles. It also could fill a walled-in football field, including the end zones, with just under 2 feet of oil.

Granholm has declared a state of disaster for some areas along the river, and President Barack Obama called Granholm to offer federal support.

Anil Kulkarni, a mechanical engineering professor at Penn State University, said a quick response was vital to the river's ecology. Snails, frogs, muskrats and even birds eat, live and nest on or near the riverbank.

"The river banks are nearby. It has more potential to inflict damage because of the proximity to land. Anything that comes in contact with oil is going to be affected badly. It prevents the natural life of species, whether it's collecting food or anything else."

Enbridge-related companies have been cited several times in recent years for violations in the Great Lakes region.

Houston-based Enbridge Energy Co., spilled almost 19,000 gallons of crude oil onto Wisconsin's Nemadji River in 2003. Another 189,000 gallons of oil spilled at the company's terminal two miles from Lake Superior, though most was contained.

In 2007, two spills released about 200,000 gallons of crude in northern Wisconsin as Enbridge was expanding a 320-mile pipeline. The company also was accused of violating Wisconsin permits designed to protect water quality during work in and around wetlands, rivers and streams, the Wisconsin Department of Natural Resources said. The violations came during construction of a 321-mile, $2 billion oil pipeline across that state. Enbridge agreed to pay $1.1 million in 2009.

The Michigan leak came from a 30-inch pipeline, which was built in 1969 and carries about 8 million gallons of oil daily from Griffith, Ind., to Sarnia, Ontario.

An 80-mile segment of the river that begins at Morrow Lake and five miles of a tributary, Portage Creek, have unsafe levels of PCBs and were placed on the federal Superfund list of high-priority hazardous waste sites in 1990. The Kalamazoo site also includes four landfills and several defunct paper mills.