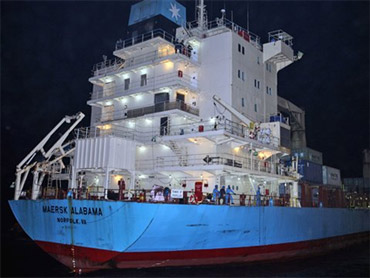 Richard Phillips, the ship captain toasted as a hero after he was taken captive by Somali pirates, ignored repeated warnings last spring to keep his freighter at least 600 miles off the African coast because of the heightened risk of attack, some members of his crew now allege.

Records obtained by The Associated Press show that maritime safety groups issued at least seven such warnings in the days before outlaws boarded the Maersk Alabama about 380 miles off the shore of Somalia.

A piracy expert and the captain's second-in-command say Phillips had the prerogative to heed the warnings or not. But some crew members - including the chief engineer, the helmsman and the navigator - say he was negligent not to change course after learning of the pirate activity.

"If you go to the grocery store and eight people get mugged on that street, wouldn't you go a different way?" said the ship's navigator, Ken Quinn, of Tampa, Fla.

Sailing beyond the 600-mile threshold would have added more than a day to the Alabama's voyage to Mombasa, Kenya, and used extra fuel, according to the ship's previous captain, who said Phillips had years of experience sailing in those dangerous waters.

Four of the 20 crew members told the AP that they blame Phillips for the hijacking.

"He caused this, and we all know it," said chief engineer Mike Perry of Riverview, Fla. "All the Alabama crew knows about it."

Reached by telephone at his home in Underhill, Vt., Phillips said he could not answer every "spurious accusation" and that he expected such criticism.

"But I don't wish to say anything. I want you to report that I had no comment," he said.

One of the four crew members who spoke to the AP is part of a lawsuit filed against Maersk Line Ltd. alleging the company was negligent in sending the ship into treacherous waters without more protection. The other members are not involved in any legal action related to the hijacking.

A separate complaint has also been filed against Phillips with the U.S. Coast Guard.

Captain Shane Murphy of Plymouth, Mass., who was second-in-command during the siege, defended Phillips.

"If he was warned to stay off a certain distance and he stayed closer, I'm sure he thought he had a reason for doing it and felt like he was justified in it," Murphy said. "I don't think he was negligent. Maybe just stubborn."

Maersk Line officials would not comment on the advisories or on Phillips' handling of them, citing the pending legal cases.

Company spokesman Kevin Speers would say only that the Maersk Alabama operated in "high-risk waters quite frequently, and that is part of the considerations that we take in putting together vessel security plans."

SecureWest International, a maritime security organization that issued several of the advisories, would not respond to requests for comment.

The AP obtained copies of the advisories from a fifth crew member who did not want to be interviewed on the record.

The Alabama's crew was apparently unaware of the advisories during the April 8 attack and the five days Phillips was held hostage in a lifeboat by three pirates. Navy SEAL sharpshooters freed him by killing the men.

Crew members found the warnings in the ship's computer system when the Alabama returned to sea, Perry said.

On March 24, SecureWest warned of pirate attacks east of Somalia that had taken place more than 500 nautical miles offshore. It advised ships to "consider maintaining a distance of more than 600 nautical miles from the coastline."

On April 1, the United Kingdom Maritime Trade Organization - a joint military command that coordinates anti-piracy efforts around the Horn of Africa - reported a recent passenger ship hijacking, gave the longitude and latitude of where it happened, and repeated the 600-mile recommendation in an e-mail addressed to "Maersk Alabama - Master."

Over the next six days, SecureWest repeated the recommendation in an e-mail to the Alabama that reported an April 2 attack. The company also sent a warning to more than a dozen ships in the region about an unidentified container vessel being attacked and reported that a German-owned container ship had also been hijacked.

"The Coalition Forces would like to reiterate that, despite increased naval presence in the region, ships and aircraft are unlikely to be close enough to provide support to vessels under attack," SecureWest warned on April 7.

The same day, SecureWest reported a "suspicious approach" of three skiffs to an unidentified vessel in the Indian Ocean. A day later, it sent out word of the Alabama's attack, warning vessels in the region to be careful.

"The advisories are fairly general," said piracy expert Derek Reveron, professor of national security affairs at the Naval War College, in Newport, R.I. "It's a big ocean. To stay 600 miles away, it's kind of hard to do, at some point. There's a limit to what they could reasonably do."

Reveron says it's the skipper's purview to heed such warnings or ignore them.

When the Alabama was at sea, Quinn said he plotted the positions of recent pirate attacks, "and they were right on our course line. Phillips sailed us right through the middle of all of that."

The ship could have gone another 100 miles out, "and it would've taken us out of the localized area where all the pirates were. That's what they were trying to tell us, to stay away from there," Quinn said.

The ship's helmsman, Abu Tasir Mohammed Reza, of West Hartford, Conn., said he lost respect for Phillips once he found out about the warnings.

"He didn't follow those warnings. He did not realize that something is coming ahead. He did not take it seriously. He did not change the course," Reza said.

During his captivity, Phillips was initially reported to have offered himself as a hostage in exchange for his crew's safety. In an Oct. 19 interview with AP, he said that was not true and insisted he never volunteered, as crew members and his family reported at the time.

Phillips, 54, said he was already a hostage when he struck a deal with the pirates to trade him for their leader, who had been taken by the Maersk Alabama's crew. The pirates reneged, he said.

But crew members say the incident could have been avoided entirely.

"I put faith in the fact that we were going to take some kind of evasive action," said John Cronan, of Merion, Pa., an engineer who has sued for injuries to his left knee and ankle. "I thought it was a given that we would do the best we could given our capabilities to get out of the danger zone. The prudent sailor avoids the hurricane instead of driving through it."

Phillips, a 30-year merchant marine known as a no-nonsense skipper at sea, would not address the topic of the warnings when contacted.

"Bottom line, it was the captain's call," said Capt. Larry Aasheim, whom Phillips had relieved as skipper about 10 days before the hijacking.

Aasheim, of Virginia Beach, Va., discussed the piracy threat with Phillips when he turned over command. He says Phillips may have been trying to save fuel and time in not heeding the 600-mile recommendation.

"I told him there are advisories out recommending that vessels stay off an increased distance. But he's been on that run for a couple of years. If he increased the distance to 600 miles, it adds 1½ days of transit time and a lot of fuel. You've got to think about that," he said.