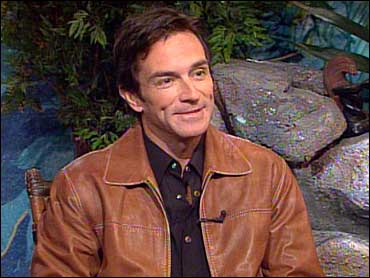 For reality fans, the drought is finally over.

For the third time in 12 seasons, "Survivor" returns tonight to the unspoiled beaches of Panama's Pearl Islands. But there's a creepy twist in the game this time: exile island.

Each week, at least one survivor will be banished there.

They'll have no idea what's going on back at camp, and they'll be forced to live on their own until they return to the game.

a preview of the series
, this season called "Survivor: Panama — Exile Island."

"I think we have probably one of the best, maybe the top five seasons with 'Exile.' It's that good," Probst told co-anchor Harry Smith.

This season, at least one survivor will be banished to exile island each episode. And Probst says that's going to be a new kind of challenge.

"It's just in the middle of nowhere, and you are on your own," he said. "There's no shelter. You are probably not going to be able to make a fire that often or have food."

And, over time, the exile gets harder to handle.

The tribes decide who goes into exile, but there is a silver lining for whoever is chosen.

"There's an idol hidden out there. An immunity idol," Probst said. "If you find it, you don't have to reveal it until the votes have been read."

The season starts with four tribes, which will be shaken up a little after the first episode.

"We had to bond them and we bonded them by doing older men, older women, younger men, younger women," according to Probst. "In episode two, we switch them to see what happens to the bond."

And Probst is promising quite a cast of characters.

"He's also the oldest guy we have out there," Probst told Smith. "Bruce is one of those guys that … cannot not tell you how he feels about life."

And the astronaut, Dan Barry, who has been on three spacewalks.

"He kept telling us the 'Survivor' experience is very similar to the type of social training they do to go up into space," Probst said.

Probst predicts that Cirie Fields will be one of the most popular contestants so far.

"I think people are going to love her because she should not be out there," he said. "She represents everybody at home who sits on the couch and says, 'I could do Survivor,' and they never get up."

And it's a second chance for Tina Scheer this year.

"She was going to be on in Guatemala," Probst said. But "six weeks before the show, her son was killed in a car wreck. We called Tina and said, 'Obviously, this isn't the time. But if next season you feel like it, we've got a spot for you.'"

It promises to be a nail-biter. "Survivor: Panama — Exile Island" premieres tonight on CBS. And the first survivor sent packing will join The Early Show tomorrow morning with the inside scoop.

Suspect: We Had Sex With Natalee
View CBS News In
CBS News App Open
Chrome Safari Continue
Be the first to know
Get browser notifications for breaking news, live events, and exclusive reporting.