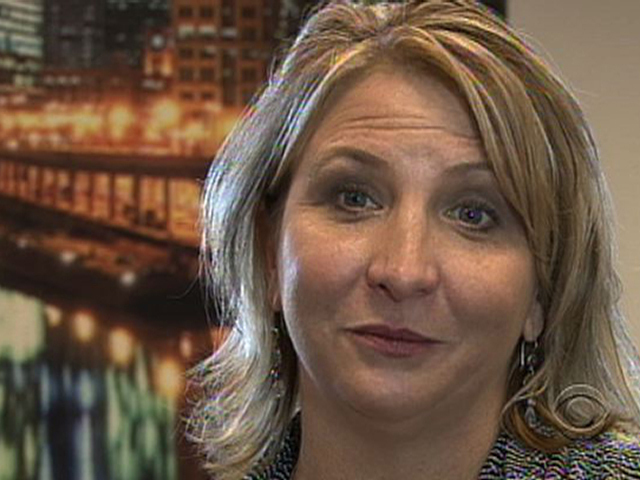 The Labor Department reported Friday that employers added 120,000 jobs last month. It is encouraging but still leaves a long way to go. Small businesses play the leading role in job creation, provided they can get the bank loans they need to expand. CBS News correspondent Russ Mitchell visits a businesswoman who's been finding the credit window shut.

"I started this company so she'd have the opportunity to have a job and a way to financially support herself," she said.

Using loans from the county for hiring special needs workers, Whiting grew "Imagination Trends," making floor signs and logos for major sports teams and other clients. In 2009, the staff grew from 3 to 36.

Whiting met expenses using credit cards and savings. Soon she had enough orders to grow into a multi- million dollar business. But then a snag.

"Now we have additional orders and additional projects that are huge," she said. "We're putting our hands up in the air because the banks aren't able to lend us the money to buy this additional equipment."

Whiting discovered that the banks weren't lending because her credit score had suddenly dropped. This despite an on-time payment history with several credit cards, which CBS reviewed.

"I worked all my life to build a credit rating of 809," she said. "The fact that they messed with my credit score when I did nothing wrong -- I'm absolutely enraged by that."

When asked about Whiting's case, Bank of America told CBS News: "We continually monitor accounts for risk and may adjust customers' lines up or down as appropriate, based on their risk profile ..."

"These credit card companies didn't look at me as a job creator," said Whiting. "They looked at me as a potential risk, the computer kicked out a warning that wasn't even really there."

"If I had better access to credit right now," said Whiting, "I could buy additional equipment and by the end of 2012, be employing 50 people in a local community that definitely needs job creation."

It was that local community that finally came through. After a year of struggle with the big banks, a local bank stepped up get offered the loans she needed.

Whiting said: "It's people making decisions about my future, not a computer kicking out statistically if I'm a good risk."

More good news: Shortly after CBS News contacted Bank of America, the bank called Whiting and not only restored her credit card lines but also offered her a separate $10,000 business line of credit.

To solve the mystery of why the banks lowered Whiting's credit lines to begin with, Mitchell spoke to 30-year banking insider Marilyn Landis, CEO of Basic Business Concepts, to explain.

Mitchell: You're seeing this more and more. Why is this happening?

Landis: Lenders have always looked at credit, trying to determine what the risks were so they could anticipate where they might have default. What changed is they turned it into a math formula and they gave that math formula to a computer. We [have] benefitted from this mass-produced credit because they were able to make these loans quickly without people, they were more cost effective. What happened was when [it] went into the recession, the bankers were looking at the credit risk they had in their credit reports and they panicked. What they wanted to do is  cut back on their risk, so they did a profile. They [asked], "Where are our defaults?" And if you fit the profile of the defaults we've had, they were gonna start reigning in your credit lines so we have less exposure.

Mitchell: Is there anything that one can do to protect themselves from this happening?

Landis: No, unfortunately it's not. As long as we live in an era where having computer scoring and computer-based decisions, and...million-dolllar loans are being done on credit scoring. So if that's the case and that's what's happening, no. All we can do is look for lenders where they are going to be looking at the individual again, getting the people back involved, and [letting] the computers be in the second position.

Dozens of protesters killed in Iran
Thanks for reading CBS NEWS.
Create your free account or log in
for more features.
View CBS News In
CBS News App Open
Chrome Safari Continue
Be the first to know
Get browser notifications for breaking news, live events, and exclusive reporting.