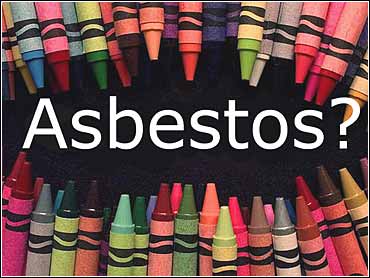 Government tests of crayons have found that while most contain asbestos-like fibers, they pose little risk to the health of children, reports CBS News Correspondent Dan Raviv.

The Consumer Product Safety Commission tested 25 crayons made by major manufacturers and found three contained amounts of asbestos too small to be scientifically significant. However, 21 of the crayons contained larger amounts of "transitional fiber," or talc, which is similar to asbestos.

The head of the Safety Commission, Ann Brown, tells CBS Radio News there's no need for a recall because there's no real hazard to children.

"If we thought that these were any kind of risk we would recall them in a nano-sec," she said. "The risk is extremely low because the fibers stay stuck in the crayon wax and the kids don't breathe them."

Not even when children eat crayons.

"If the kids do eat them – [and] kids do eat crayons — they just go through the body," she added.

"We can say with confidence to parents and teachers, 'Don't be alarmed, you can use the crayons you have in your schools and in your homes and that are on the shelves.'"

However, responding to government requests, the nation's top three crayon manufacturers have agreed to reformulate their crayons to remove the fibers.

"In some short amount of time, you're going to see new crayons on the shelves that have none of these fibers in them," said Brown. "Although these [current] crayons aren't harmful to children, when you're dealing with kids, you shouldn't have anything in crayons that is at all dangerous."

Dixon Ticonderoga, which makes Prang crayons, Rose Art, and Binney and Smith, makers of Crayola crayons, all are agreeing to follow the agency's recommendation.

"We expect that we'll be able to begin producing reformulated crayons that are equally safe, with the same quality," said Mark Schwab, the company's president.

Binney and Smith has said testing by an independent government-certified lab found no asbestos in Crayola crayons.

The safety commission researchers found trace amounts of asbestos in two Crayola crayons and in one Prang crayon. But of the 25 tested, only two Crayola and two Rose Art crayons contained none of the transitional fibers.

There are no known reports of anyone getting sick from using or making crayons. And asbestos-related illness tends to result from exposure to airborne fibers - usually in an industrial setting. The safety commission decided there was no scientific basis for a crayon recall.