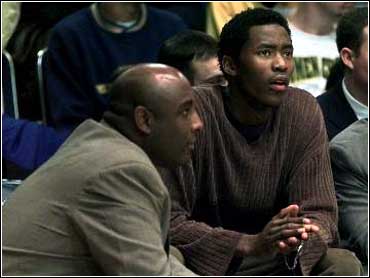 Michigan freshman Jamal Crawford, who had just finished a six-game NCAA suspension, was suspended for eight more games on Thursday.

"I was real disappointed with the ruling," Crawford said after Michigan's 78-75 loss to Purdue, the game that was to have marked Crawford's return from the first suspension. "I really don't think I did anything wrong. But I have to live with the ruling."

The first suspension was for Crawford's living arrangements while a high school player in Seattle. The eight-game ban came down after it was discovered Crawford had tried to make himself eligible for the NBA draft while still in high school and after having signed a letter of intent to play for Michigan.

"Today's ruling had nothing to do with the prior investigation, from the original ruling of six games," assistant sports information director Tom Wywrot said.

The NCAA originally declared Crawford in violation of a rule that prohibits high school players from declaring themselves eligible for professional sports leagues' drafts. Crawford signed and sent a letter to the NBA last May, seeking to declare himself eligible for the June 1999 draft.

In that letter, which wasn't accepted by the NBA because it arrived too late to place his name on the draft list, Crawford expressed the mistaken impression that he wouldn't lose his college eligibility.

"I was just checking it out," Crawford said. "People said, `You have some skills. Check it out.' So, I just thought I would."

Crawford sent another letter six days later in which he withdrew from the draft, the NBA said.

NCAA rules provide a one-time exception for college players who put their name on the NBA draft list to retain their eligibility if they aren't drafted. There is no such exception for high school players.

Venora Skinner told The Seattle Times that her son plans to turn professional after this season.

"Jamal is going to enter his name in the draft," she said.

Crawford denied it. He said "without doubt" he would return and play for Michigan next season.

"That's my mom talking," Crawford said. "That's not coming from me."

Still, it would be hard for him to return to Michigan for his sophomore year, his mother said.

"The only way is if all this pressure stops," Skinner said. "I'm not going through another year of this. I'm serious."

After learning about Crawford's letter to the NBA, the ruling body of college sports said early Thursday that Crawford's college career was finished. The university appealed and the NCAA came back later in the day with the eight-game suspension.

"This ruling was based upon the NBA decision," Wywrot said. "Ihad nothing to do with the prior investigation at all. The NCAA, before, withdrew his name from all games, so essentially Michigan won the appeal."

"We are deeply disappointed by the inequity of this decision," university president Lee Bollinger said in a statement. "Any sensible approach would have yielded a different result."

"We do not think Jamal's circumstances warrant this level of severity."

The first suspension also ordered Crawford to repay $15,000 in benefits he received from Seattle businessman Barry Henthorn, with whom the player lived for three years while in high school. On Thursday, the NCAA said Crawford instead could give $11,300 to the charity of his choice.

"They took off the money for food, clothing and other expenses," Wywrot said.

"This is very unfortunate, to say the least," Michigan coach Brian Ellerbe said.

There are three regular season games left, and the Wolverines are assured of playing at least one game in the Big Ten tournament. Counting the loss to Purdue, that's five games. If that's as far as Michigan advances, the remaining three games of the suspension would be served at the start of next season.

Wywrot also said Michigan won't have to forfeit any of the games in which Crawford has appeared.

Crawford, a 6-foot-6 swingman, was Michigan's leading scorer, averaging 16.6 points per game. The Wolverines are 1-6 without Crawford and have lost eight of nine games overall. They are 4-9 in the Big Ten and 13-11 overall.