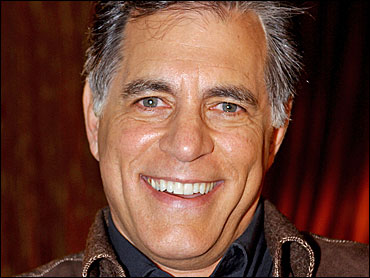 A former TV game show host and his wife were killed Monday morning when their small plane crashed into Santa Monica Bay, authorities said. Rescue crews were searching for a third person also aboard the plane.

The bodies of Peter Tomarken, 63, host of the hit 1980s game show "Press Your Luck," and his wife, Kathleen Abigail Tomarken, 41, were identified by the Los Angeles County coroner's office.

The plane was on its way to San Diego to ferry a medical patient to the UCLA Medical Center, said Doug Griffith, a spokesman for Angel Flight West, a nonprofit which provides free air transportation for needy patients.

Griffith said the pilot was a volunteer for the group, identifying him only as a 63-year-old man. While FAA records showed the plane was registered to Tomarken, it was unclear if he was the pilot.

The plane apparently had engine trouble and was headed back to Santa Monica Airport, located about two miles inland, but went down about 9:35 a.m. just off shore, said Federal Aviation Administration spokesman Allen Kenitzer.

Rescue boats and divers searching for the third person believed to be aboard the plane were clustered about a half-mile southwest of the Santa Monica Pier where the plane went down in about 19 feet of water.

Luis Garr said he didn't hear the engine but heard the splash as the plane "kind of landed into the water."

"It's a big splash, a huge splash. ... Then it started going down," Garr said. "The wings were still floating so I was, `Get out! Get out!' because the door was still available to get out and nobody came out. So the plane kept going down, down, down."

"Press Your Luck" was known for contestants shouting the slogan "Big bucks! No whammies!"

Tomarken's agent, Fred Wostbrock, said his client's first game show was "Hit Man!," which ran 13 weeks on NBC, followed by the four-year hit "Press Your Luck" on CBS. He also was on "Bargain Hunters," "Wipe-Out" and "Paranoia."

"He was always a fun guy to be around, and he just loved the genre of game shows," Wostbrock said.