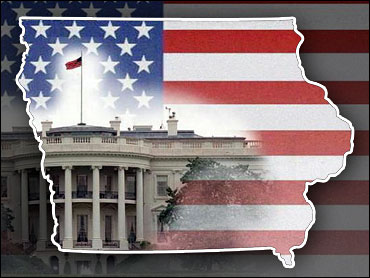 The caucuses may be the first real contest of the presidential campaign, but they will not be selecting any delegates to the national conventions.

Instead, they will be measuring the popularity of the candidates - and the parties use radically different tools.

Both parties hold caucuses in each of Iowa's 1,781 precincts: They might be in a school, a church, a library, even a home. But that's where the similarity ends, CBS News senior political correspondent Jeff Greenfield reports.

The Republican process is simple. You show up at 7 p.m. and declare you're a registered Republican - if not, you can register right there.

And after short speeches by candidates' backers, "You get a blank piece of paper, you simply write down the name, and that's completed and you're done," said Mary Tiffany, Iowa Republican Party communications director.

A secret ballot, a straight up count. The candidate with the most votes wins. A model of simplicity.

But the Democrats? Not so much.

Democrats show up at 6:30 p.m., and doors close at 7 p.m. And then - instead of a secret ballot, caucus-goers publicly declare their choices by moving into different corners of the room, into "presidential preference groups."

Unlike Republicans, there no secret ballot. As one 2004 caucus in Adair, Iowa, shows, you have to stand up in front of perhaps your boss or spouse and declare your choice. Doesn't that raise the possibility of intimidation?

"It is neighbors talking to neighbors about who they're selecting for their nominee, they're expressing the right to vote for who they please," said Democratic Party communications director Carrie Giddens.

A head count is taken. And - critically - a candidate must achieve a certain level of support - usually 15 percent - to be "viable." You might think of this first step as an "elimination round."

If a canidate is declared "not-viable," his supporters can either go home - or "realign," joining up with a candidate who has survived, and move to another corner of the room.

What happens is something between earnest debate and old-fashioned horse-trading - as in 2004 when backers of John Kerry and John Edwards argued and pleaded with backers of Howard Dean to join up with them.

Once realignment is done, a final head count is made - and each precinct awards delegates not to the national conventions, but to the Iowa Democratic County Conventions. Drake University Professor Dennis Goldford does his best to explain: "It's the number of people in the preference group times the number of delegates that precinct sends to the county convention, divided by the total number of caucus participants in that precinct."

Uh, right. What really matters - what everyone will be talking about - is the final statewide tally that will tell us how much support Clinton, Edwards, Obama and the others generated.