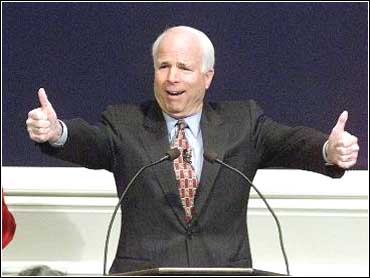 Bradley was playing with two girls' teams in Portsmouth. And he still had the old touch, CBS News correspondent Phil Jones reports.

And at a local brewery, Bradley passed up a drink, even after a strenuous day on the campaign trail.

As for the GOP hopefuls, with five days left before the primary, they were concerned with the state of their campaigns.

A new CBS News poll shows the straight-talk express campaign of John McCain continues to roll on. The poll shows Mccain at 5 percentage points ahead of Texas Gov. George W. Bush. Steve Forbes is struggling to make it a three-man race. He is attacking the front-runners as the timid twins on tax cuts and abortion.

"They've been dancing around that issue, Forbes said Thursday. "I have taken a stand on the life issue."

This weekend, all the candidates will be focusing on the state's largest voting block: independents. Bill Bradley especially has to hope for a strong independent turnout.