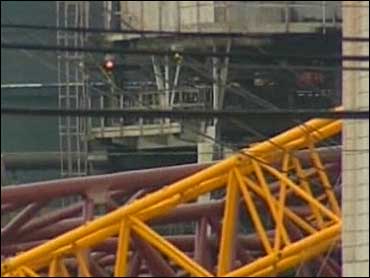 One of the nation's largest mobile cranes collapsed at a Houston oil refinery Friday, killing four workers and injuring seven others in the latest of several fatal accidents that have raised concerns about the safety of construction cranes.

The 30-story-tall crane, capable of lifting 1 million pounds, fell over at a LyondellBasell refinery in southeast Houston about 2 p.m., said Jim Roecker, the company's vice president for refining.

The massive, deep red crane lay on top of a smaller, bright yellow crane on the grounds of the refinery. Ambulances and fire trucks were lined up outside.

The casualties were in the area of the crane, but officials still aren't certain whether they were on the crane or under it, Roecker said.

Three of the injured were treated and released at the scene, said Houston Fire Department Assistant Chief Omero Longoria. Two severely injured workers were taken by helicopter to Memorial Hermann-Texas Medical Center hospital and the other two injured workers was taken to a hospital by ambulance.

The crane was there for refinery maintenance work, but that work had not been started at the time of the collapse, according to CBS affiliate KHOU in Houston.

"We were actually preparing to do some major maintenance activities there. That's why the crane was placed where it was," a company spokesman said. "At this point, we're very unsure as to the cause of the failure of the crane."

The crane belonged to Deep South Crane & Rigging. Roecker described it as one of the nation's largest mobile cranes, at 300 feet tall with a 400-foot boom. Construction cranes run taller, but they are not mobile.

"This is a traumatic experience for all of us. We have to focus on the safety and health of our employees," Roecker said.

Deep South spokeswoman Margaret Landry issued a statement from the company's headquarters in Baton Rouge, La., saying it was investigating "to determine the root cause, correct it and ensure that this type of tragedy does not occur again."

Aerial views of the site weren't immediately available; air space around Houston was restricted because President Bush was in town raising funds for a congressional candidate.

Near the scene of the collapse, Mattie Graham stood with her husband, Deep South worker Horace Graham.

"I'm thinking about their families. He could have been there today," she said, gesturing to her husband.

The refinery has about 3,000 LyondellBasell workers and 1,500 contract workers, Roecker said. He said all personnel at the plant were accounted for, and the plant was operating as usual.

Crane safety has been getting extra scrutiny in recent months because of an alarming number of crane-related deaths in places such as New York, Miami and Las Vegas.

In New York City, two crane accidents since March have killed nine people — a greater number than the total deaths from cranes over the previous decade.

An Associated Press analysis in June found that cities and states have wildly varying rules governing construction cranes, and some have no regulations at all, choosing instead to rely on federal guidelines dating back nearly 40 years that some experts say haven't kept up with technological advances.

Texas led the nation with 26 crane-related fatalities in 2005 and 2006, according to federal statistics. Cranes in Texas operate without any state or local oversight, leaving that job to federal regulators.

The crane at the refinery had been delivered in pieces and assembled on site within the last month. It was brought in to remove the roof of the coker unit so large drums could be removed from inside, Roecker said. Cokers convert crude oil to petroleum products.

East Texas Crane Academy president Joe Bob Williams, whose company has certified crane operators for Lyondell, said it's unusual for such cranes to fail because of the number of people involved in their maintenance.

"It's really odd for these cranes to have any issues because there are so many eyes looking in," Williams said.

Cameras are mounted around the plant and Roecker said the company hopes that video from those cameras will help it figure out what happened.

"As far as what happened today, we'll get there. Right now our focus is on the families and victims," Roecker said.

The Houston refinery is one of the world's largest for processing high-sulfur crude oil. The facility itself covers about 700 acres along the Houston Ship Channel at the city limits of Houston and Pasadena.

Texas is one of 35 states that do not require crane operators to be licensed. Earlier this year in Dallas, city officials found that eight of 23 cranes being used across the city had uncertified operators at the controls.

OSHA standards require cranes to undergo annual inspections, but it is a self-policing mandate for crane owners. Federal law requires that inspection records be kept, but not submitted.

Roecker said OSHA and other regulatory agencies had been notified of Friday's accident.

Lyondell Chemical, a U.S. company, and the Dutch firm Basell were rivals until they announced a $12.1 billion deal last July to create one of the world's largest chemical companies.

On the chemical side, Lyondell produces ethylene, a crucial precursor to a range of other chemicals, as well as propylene oxide, which is also used in producing a variety of chemical products. Basell focuses on polyolefins, common types of plastic.