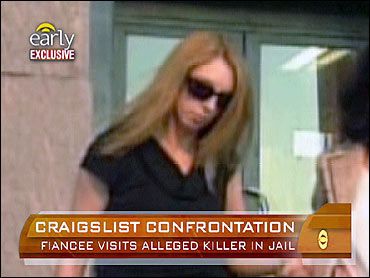 The former fiancee of a man accused of killing a masseuse he met on online ad site Craigslist has ended the relationship and wants to get on with her life.

The lawyer for Megan McAllister said Tuesday that his client visited Philip Markoff on June 11 and told him she might never see him again.

Robert Honecker Jr. says McAllister plans to attend medical school in the fall and is moving on without him.

McAllister canceled her August wedding to Markoff after he was accused in the April killing of 25-year-old Julissa Brisman. Markoff was ordered held without bail after pleading not guilty Monday.

Suffolk County District Attorney Daniel Conley told CBS' The Early Show Monday that his office continues to receive new information on the case, though he admitted most of it has been unhelpful.

Despite that, Conley said, "We believe that we've built a very strong case against this defendant."