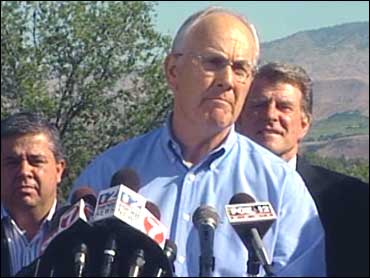 Sen. Larry Craig is reconsidering his decision to resign after his arrest in a Minnesota airport sex sting and may still fight for his Senate seat, his spokesman said Tuesday evening.

"It's not such a foregone conclusion anymore, that the only thing he could do was resign," said Sidney Smith, Craig's spokesman in Idaho's capital.

"We're still preparing as if Senator Craig will resign Sept. 30, but the outcome of the legal case in Minnesota and the ethics investigation will have an impact on whether we're able to stay in the fight - and stay in the Senate."

While Craig publicly announced his resignation at a news conference in Idaho on Saturday, CBS News correspondent Chip Reid reported that privately he was sending out a very different message.

In fact, just minutes before that press conference, he mistakenly called a wrong number and left a recorded message obtained by the newspaper Roll Call and confirmed by CBS News to be the voice of the senator.

"I'm willing to fight, that I've got quality people out there fighting in my defense and that this thing could take a new turn," Craig said in a call apparently intended for his lawyer.

On Tuesday, Specter, R-Pa., senior Republican on the Senate Judiciary Committee, suggested Craig's GOP colleagues who pressured him last week to resign should re-examine the facts surrounding his arrest.

"The more people take a look at the situation, there may well be second thoughts," said Specter, a former prosecutor. If Craig had not pleaded guilty to a reduced charge and instead demanded a trial, "I believe he would have been exonerated," Specter said.

On Aug. 1, Craig, 62, pleaded guilty to a reduced charge of misdemeanor disorderly conduct following his June 11 arrest at the Minneapolis-St. Paul International Airport.

But Craig, who remained in Idaho on Tuesday as the Senate reconvened following its summer break, contended throughout last week he had done nothing wrong and said his only mistake was pleading guilty.

"It was a little more cut and dried a few days ago," Smith said. "There weren't many options. He was basically going to have to step aside. Now, there's a little more to it."

Craig has hired a high-powered crisis management team including Billy Martin, the lawyer for Atlanta Falcons quarterback Michael Vick in his dogfighting case, and Washington attorney Stan Brand, a former general counsel to the U.S. House. Martin is looking into the Minnesota guilty plea; Brand, who represented Major League Baseball in the congressional investigation into steroid use, will handle any Senate Ethics Committee probe.

Craig's third six-year term in the Senate expires in January 2009.

White House spokeswoman Dana Perino, traveling with President Bush in Australia, told reporters, "I don't think our views have changed." She added: "It's the senator's decision, the senator's seat."

For Republican leaders in the Senate, "this is about as welcome as discovering there's a smallpox epidemic at the Capitol," said CBS News chief Washington correspondent Bob Schieffer. "They thought they had cut this thing off. They thought they were going to move forward. And now they're going to have to go through this whole thing again. This is a real mess for the Republicans."

Republican Idaho Gov. C.L. "Butch" Otter has not named Craig's successor and hasn't said when he will.

Craig has won support from his family, including his three children, whom he adopted after marrying their mother, the former Suzanne Scott, in 1983. Jay Craig, 33, told The Associated Press that he, his brother, Michael Craig, 38, and his sister, Shae Howell, 36, spoke candidly with their father about what happened in Minnesota.

"Our conclusion was there was no wrongdoing there," Jay Craig said. "He was a victim of circumstance, in the wrong place at the wrong time when this sting operation was going on."