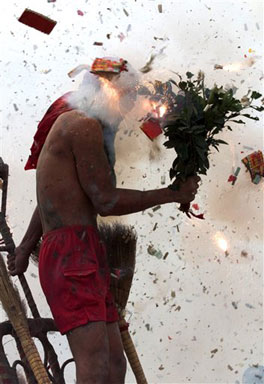 (As reported 2/24/99)
U.S. officials joined the largest organization of older Americans Wednesday to launch a campaign against Medicare fraud called, "Who Pays? You Pay."

Secretary of Health and Human Services Donna Shalala says the program's first offerings include a brochure, an 800 number and a public service announcement.

"There is overbilling in the system," Donna Shalala told CBS News. "Some of it is inadvertent -- all of it is not really criminal. We want to actually get all of the senior citizens who are in the program, and those that are disabled to check their bills. That's the point of the campaign."

Shalala says the main goal of the campaign is to reach individuals.

"We're doing the system oversight, but we need individuals to check their bills."

Another goal is to make sure the billing process is as clear-cut for Medicare patients as possible.

"We're actually simplifying the bills at the same time. By this summer, we'll have pretty straightforward uniform bills across the country," Shalala says.

Medicare recipients are also asked to get a second opinion if they are confused about their bills. Shalala says that patients should check with their doctors.

"While this may add some burden to a doctor's office, the doctors themselves want to make sure the bills are adequate and accurate. So, we consider them part of this campaign."

Another goal of the campaign is to educate consumers about how they can protect their own privacy by only giving their Medicare number to certified health care officials, Shalala says.

Shalala says the government has already made progress in the last year with Medicare, and has cut the error rate in half. Along with other improvements, Shalala says that $1 billion has been put back into the trust fund last year.

"We really do believe that if we empower consumers, that they pay attention to their own bills, this is an enormous step forward in making sure that we don't pay for more than we get," she says.

To find out more about the Department of Health and Human Services' medical fraud campaign, call the Fraud and Abuse Hotline at 1-800-HHS-TIPS.