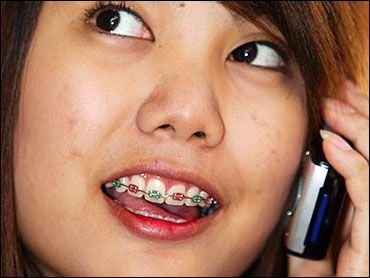 Authorities are clamping down on the Thai teen fashion fad of wearing fake orthodontic braces by targeting those who sell and make the pseudo-dental gear with steep fines and prison time, officials said Thursday.

Rather than getting fitted for the real, and expensive, option, teens have been buying do-it-yourself kits in stores and select red, pink, yellow, blue or multicolored rubber bands to match their outfits or moods. Clear or neutral bands are rarely seen in Thai mouths.

But, the government's Consumer Protection Board says the trend is unsafe.

"Some people put the fashion (braces) on by themselves, which is dangerous because they could come loose and slip into the throat," said Rasamee Vistaveth, secretary-general of the Consumer Protection Board, which is under the prime minister's office.

The fake braces, which are glued onto the teeth, can also cause sores on the gums and inside the mouth and some of the wires have been found to contain lead, she said.

Rasamee said the board was planning to sign an order Thursday punishing sellers, importers and producers of fake braces, which would take effect immediately.

Under the new order, selling fake braces would be punishable by six months in prison or a $1,300 fine. Importers and producers could face up to one year behind bars and a $2,600 fine.

The consumer board has been tracking the trend and authorities have made several seizures of fake braces during raids, Rasamee said, adding she believed the trend had already peaked but the crackdown was, nonetheless, continuing.