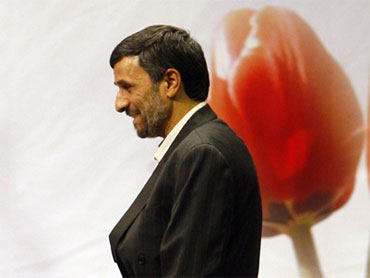 The Iranian government has seized and detained several hundred activists, journalists and students across the nation, in one of the most extensive crackdowns on key dissidents since the 1979 Islamic Revolution.

Even as unprecedented protests broke out on the streets after the June 12 disputed presidential election, the most stinging backlash from authorities has come away from the crowds through roundups and targeted arrests, according to witnesses and human rights organizations. They say plainclothes security agents have also put dozens of the country's most experienced pro-reform leaders behind bars.

The Iranian government says only that unspecified figures responsible for fomenting unrest have been taken into custody.

The arrests have drained the pool of potential leaders of a protest movement that claims President Mahmoud Ahmadinejad stole the election by fraud. They also point to the potential for high-profile trials - and serious sentences - before a special judicial forum created to handle cases from the unrest.

With the main reformist candidate Mir Hossein Mousavi under constant police surveillance, protests demanding a new vote have withered. Many of those rounded up during demonstrations have been released within days.

But most of those detained in raids against potential opposition remain in custody. That has spread fear among Mousavi supporters and left the opposition movement reeling.

"We heard some news about people who are arrested at night and we are worried if it could happen to us," a Tehran resident active in the protests wrote in an e-mail Friday, asking for anonymity for fear of government retaliation.

The targeted arrests appear to have begun the day after the election. Several of Iran's best-known reformist politicians were taken into custody, including the brother and several close allies of former President Mohammad Khatami.

Since then, at least 230 more students, professors, journalists and reformists have been arrested, according to the International Campaign for Human Rights in Iran. At least 29 are known to have been released, the New York-based organization said in a list released Wednesday, although it acknowledged that the numbers were constantly changing.

The crackdown appears to have grown bolder as the government escalated its use of force on the streets.

Security agents arrested nearly the entire staff of Mousavi's newspaper, The Green Word, Monday night, seizing 25 people in a raid on its offices, according to a statement on Mousavi's Web site. Four or five who were out of the office during the raid remain free, according to the paper.

On Thursday, authorities arrested 70 reformist university professors after they met with Mousavi, his Web site said. At least 66 were later freed, said Hadi Ghaemi, spokesman for the International Campaign for Human Rights in Iran.

Among the most prominent reformists detained was Ebrahim Yazdi, 78, who was a key aide of the Islamic Republic's founder, Ayatollah Ruhollah Khomeini, and served as foreign minister after the 1979 revolution. Yazdi was hospitalized with a bladder problem when agents walked into his room on June 17, had his intravenous tubes disconnected and took him to Tehran's notorious Evin Prison.

"They did not show any judicial or legal papers, nothing," Yazdi told The Associated Press by telephone from Tehran. "Even in prison they didn't interrogate me. Nobody came to tell me why they were arresting me."

Yazdi said he was treated respectfully and released the next day. But many other members of his Freedom Movement of Iran remain in prison along with leaders of other reformist parties, some of whom served in Khatami's government.

They include Abdollah Ramezanzadeh, a former government spokesman under Khatami; Saeed Hajjarian, an adviser to Khatami who was paralyzed in an assassination attempt in 2000; and human rights lawyer Abdolfattah Soltani, who was arrested in his office by security forces posing as clients, according to the International Campaign for Human Rights in Iran.

Officials even briefly arrested the daughter and four other relatives of one of Iran's most powerful men, Ayatollah Hashemi Rafsanjani. The detentions were seen as an official warning to Rafsanjani, a former conservative president who many believe now favors the opposition.

Observers say the crackdown is the largest since Khatami's 1997 election and the birth of the modern Iranian reform movement.

"The people that they have arrested represent a wide spectrum of the political orientation," Yazdi said. "It is much broader than in the past."

State television has begun broadcasting purported confessions of street protesters who say they acted on behalf of Britain and other Western nations in a bid to destabilize the government.

"These kinds of arrests usually are undertaken in order to produce some kind of a show trial," said Ahmad Sadri, a sociology professor at Lake Forest College in Illinois who writes a column for the reformist Iranian daily Etemad-e-Melli, or National Confidence.

The editor-in-chief of Etemad-e-Melli, which is owned by reformist presidential candidate Mahdi Karroubi, was taken into custody last week, according to the Committee to Protect Journalists, which says roughly 40 journalists have been arrested. Among them was Newsweek correspondent Maziar Bahari, a dual Iranian-Canadian citizen, and Iason Athanasiadis, a Greek national reporting for The Washington Times.

Arrests of foreign reporters without family ties to Iran have been rare in recent years. The Greek government said Athanasiadis, who lived in Iran from 2004-2007, was taken into custody last week on an alleged visa violation. Iran has said little about the case.

Athanasiadis' parents have appealed for his release, calling him a reporter, photographer and filmmaker with "a particular love of Iran, and a deep respect for its cultural and religious traditions."

Arrests have taken place not only in Tehran but in smaller cities like Hamedan, Zanjan and Shiraz, rights groups said. The numbers of detentions outside Tehran could not be verified independently.

"It causes mass paranoia that nowhere's safe; you can't be in your home, you can't be in the hospital," said Afshon Ostovar, who is writing a doctoral dissertation on Iran's security forces at the University of Michigan.

The targeted roundups allow authorities to suppress dissent while avoiding the flood of amateur videos and photographs that have documented police or militia confrontations with demonstrators. The most famous showed music student Neda Agha Soltan bleeding to death from a gunshot wound on a Tehran street.

"It's much easier to arrest people at night than crack heads in the daylight," Ostvar said. "There's no camera, there's no proof, there's no pictures."

Iranian officials appear to have identified some protest leaders by monitoring cell phones, e-mail accounts and Internet activity. The fear of official surveillance has forced some opposition supporters into self-censorship.

"In any demonstrations we turn off our cell phones and remove its battery because we heard they can search people by the phones even when it's off," the Tehran protester who insisted on anonymity wrote in his e-mail.

Many fear the government can track down opponents by tracing their computers if they visit certain Web sites.

Sadri, the professor in Illinois who regularly visits Iran, said he has begun couching his criticism of the government in his newspapers, taking an indirect approach to avoid angering the government.

"It is much more writing in allegory and symbols," he said.
By Associated Press Writer Michael Weissenstein