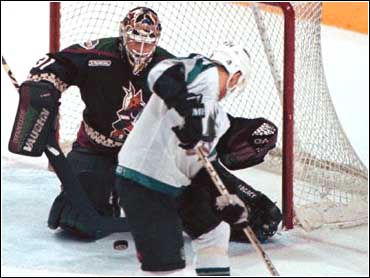 Defenseman Keith Carney broke a scoreless tie with his second goal of the season 1:32 into overtime and the Phoenix Coyotes beat the San Jose Sharks 1-0 Tuesday night.

The Coyotes picked up their 14th road win, second most in the league, despite being outshot 34-15. Bob Essensa had 34 saves in his first shutout this season and 17th of his career.

Carney, after getting a pass from Greg Adams, swept around defender Patrick Marleau and got off a shot that zoomed past goalie Steve Shields.

It was the fifth straight loss for San Jose, the last two coming in overtime.

San Jose went 0-4 on the power play and is 0-19 with the man-advantage in four games.

Essensa again thwarted a Sharks' scoring chance with 14:39 remaining. Mike Ricci dished off to Marco Sturm, who lifted a shot from just outside the crease, but Essensa stuck his glove out and snared it.

The Coyotes were outshot 26-8 over the first two periods but fended off the Sharks, killing two successive power plays midway through the second, including a 5-on-3 that lasted for 1:06.

With just seconds left in the second, Jeremy Roenick skated in on a breakaway and unleashed a slap shot that Shields managed to stop with a glove save 10 feet in front of the net.

Earlier n the period, shots by San Jose's Brad Stuart and the Coyotes' Radoslav Suchy both hit the post and bounced away.