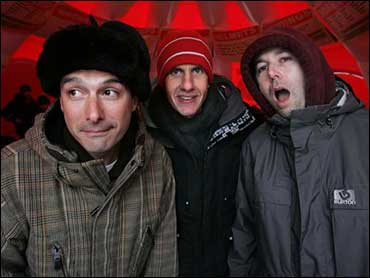 Bobby Cox didn't have to sweat out his 1,000th victory as manager of the Atlanta Braves.

It wasn't just because Atlanta easily defeated the Baltimore Orioles 10-5 Saturday. Fact is, Cox forgot about the milestone.

"I didn't think about it until I was walking off the field and (Tom) Glavine told me," Cox said. "But that's a good way to do it, beating one of the best pitchers in baseball."

Javy Lopez homered in a four-run first inning against Mike Mussina, sparking the Braves to their first win against the Orioles in five interleague games over two years.

Cox became the 19th manager in major-league history to win 1,000 games with the same team. He also moved within five victories of becoming the winningest manager in franchise history Frank Selee won 1,004 with the Boston Braves from 1890-1901.

"It's something I wasn't thinking about coming in today," Cox said. "It means you've had some good players to win that many in one spot. I'm happy about it, I'm not going to just shrug it off, because it's nice."

"Bobby Cox is the one who turned this team around," Lopez said. "I feel happy for him. He deserved it."

Lopez went 4-for-5 with four RBIs and Kevin Millwood (8-2) allowed four runs and five hits in 6 2-3 innings for the Braves, who lost three straight to Baltimore at home last year and dropped a 3-2 decision Friday night.

"We had to score a lot of runs against the Orioles. We already had a bad experience from last year," Lopez said. "They're the type of team that can come back."

Mussina (4-3), activated from the disabled list before the game, struck out 10 but gave up eight runs and eight hits in 4 2-3 innings. The last time the right-hander surrendered that many runs was July 26, 1996, against Cleveland.

It was Mussina's first appearance since May 14, when he had his nose broken by a line drive off the bat of Cleveland's Sandy Alomar.

"It felt like it was the first time I've been out there in a while. We're in June now and it's still like spring training for me," Mussina said. "I'll be better next time."

Atlanta pulled away with in the fifth, scoring four runs for an 8-2 lead. Walt Weiss singled, took third on a double by Keith Lockhart and scored on a groundball by Andres Galarraga. Lopez then chased Mussina with a two-out RBI single.

Pinch-hitter Gerald Williams greeted Arthur Rhodes with an RBI single and Andruw Jones drove in a run with an infield hit.

Rafael Palmeiro hit his 15th homer in the Baltimore sixth and Joe Carter singled in a run in the seventh. Lopez doubled in a run and Williams had an RBI single in the ninth.

Even thoug he was ineffective, the return of Mussina was a big positive on an otherwise dismal day for the Orioles.

"He hung a couple of curveballs in the first inning, but he settled down after that and was pretty solid," manager Ray Miller said. "He'll be fine. He just had to get this one out of the way."

With two on and two out in the Atlanta first, Ryan Klesko hit a two-run double and Lopez followed by driving a hanging curveball 407 feet into the left-field seats for his 13th homer.

Baltimore got a run on a wild pitch in the second. An RBI double by Cal Ripken made it 4-2 in the fourth.

Notes: The crowd of 48,098 was the second-largest in the seven-year history of Camden Yards. ... Millwood has won five of his last six decisions. ... Lopez has 35 RBIs in his last 33 games. ... It was the 14th time in the regular season that Mussina struck out 10 or more batters, the third time this year. He's also done it twice in the playoffs. ... Ripken's double was the 526th, moving him past Ted Williams into a tie with Dave Parker for 26th on the career list.