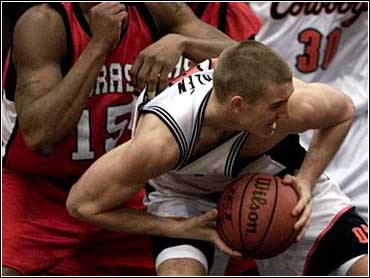 Coming off a tough stretch, No. 8 Oklahoma State had a little fun Saturday night.

The Cowboys, who had lost at Texas on Wednesday night after winning by three at Oklahoma last Saturday, moved back into a tie in the Big 12 race with a 94-55 victory over Nebraska.

"We had to come out and make a statement," said Brian Montonati, who had 22 points and 12 rebounds and sank his first two 3-pointers of the season. "A lot of people around the conference and around the country are probably thinking, `What kind of team's going to show up against Nebraska?'

"We put the (Texas) loss behind us and learned a little bit from it and came out and played hard."

Glendon Alexander added 18 points, all on 3-pointers, as the Cowboys kept pace with Texas and caught up with Iowa State in the league race. Iowa State held the lead alone before losing at Colorado earlier Saturday.

"We were stretching in locker room when we heard the score announced," Montonati said. "It kind of got everybody motivated a little bit more. I think that helped us."

Louis Truscott scored 14 for Nebraska (10-15, 3-9), which lost its fifth in a row. The Cornhuskers committed 20 turnovers, which Oklahoma State turned into 23 points, and they got outrebounded 41-31.

"It's really hard when you get beat this badly, and we got handled," coach Danny Nee said. "But we lost to the eighth-ranked team in the country. Where we are and where they are is this score. It's very obvious."

Oklahoma Stte led by 18 at halftime and then outscored the Cornhuskers 18-1 to start the second half. Even Doug Gottlieb, a 15 percent shooter from 3-point range, got into the act. He made one to cap the second-half run.

Montonati, who had missed his only two tries from 3-point range this season, hit consecutive 3s late in the second half to stretch the lead to 40.

"My high school coach was here today watching me play," Montonati said. "He told me that I could hit it. I've been working on it in practice a lot. It's just something I didn't really think about, I just stepped up and hit 'em both."

Oklahoma State had little trouble working the ball inside against Nebraska's defense, and also made the Cornhuskers pay from the perimeter.

After Nebraska made the game's first basket, the Cowboys scored 10 straight points during a three-minute span. The Cornhuskers got no closer than five the rest of the way.

A 17-4 run that started midway through the first half gave Oklahoma State a 34-16 lead. The Cowboys led by 22 three times in the half.

Nebraska's first basket of the second half didn't come until the 11:44 mark, when Cary Cochran sank a 3-pointer to make the score 65-33.

"Our shots weren't falling and we weren't getting back on defense," Nebraska's Kimani Ffriend said. "They were just running the floor and pushing the ball. They were getting a lot of open looks and knocking down their shots."

The Cowboys don't have long to enjoy this victory. They travel to Missouri on Monday night the Tigers are in fourth place in the league and play at Iowa State next Saturday.

"This is a tough stretch for us," coach Eddie Sutton said. "When you look at our schedule, we're playing some really good basketball teams, and this week we have to go on the road and play both of them. That makes it extra tough."

With the victory, Oklahoma State has won at least 10 conference games for the third straight season. The last time the Cowboys did that was 1937-40.