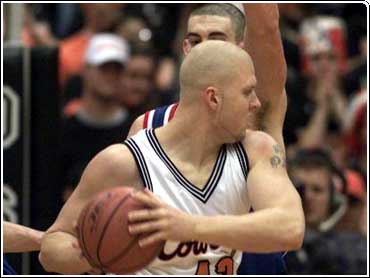 As milestones go, this was one Kansas coach Roy Williams would rather forget.

"This was the worst feeling that I've ever had on the bench," he said. "I felt like I was useless.

"I did not have them prepared to face this kind of exhibition. I was totally outcoached in every way and we were totally manhandled on the court."

Kansas (17-6, 6-3) has lost four of six, all on the road. The Jayhawks came in averaging 83 points, but shot just 34 percent against the league's stingiest defense.

"I told Roy that we played a little over our heads tonight," coach Eddie Sutton said. "You play like that, you can play with most people in the country. I thought our defense was outstanding."

Mason was 10-of-14 from the field and finished one point shy of his career high. He did miss two dunk attempts, but made all five of his 3-point tries and turned one of those into a four-point play.

"Desmond led us tonight like he did against Texas," said Oklahoma State's Doug Gottlieb, referring to Mason's 30-point game against the Longhorns on Jan. 19. "He's a great player, and great players play great in big games."

Oklahoma State, which shot 4 percent, took control early and didn't give it up.

Kansas had only five offensive rebounds in the first half and was held to one shot on just about every possession during the Cowboys' run. Meanwhile Oklahoma State went 9-of-12, doing most of its damage inside.

Mason scored eight of the Cowboys' 12 points during one stretch later in the half when they took their biggest lead, 43-22.

Things didn't get any better for Kansas in the second half, as the Cowboys kept up their defensive intensity and gradually pulled away even further.

"They outplayed us in every phase," Nick Bradford said. "Coming into the game we didn't want to give them open looks because they have great shooters. That's what ended up happening they got open looks and knocked them down."

Joe Adkins had 18 points and Gottlieb scored 12. He also was 6-of-10 from the foul line, where he came in shooting just 42 percent.

Hinrich led Kansas with 12 points. Kenny Gregory, Kansas' leading scorer with a 13.7 average, didn't score until the 13:36 mark of the second half and finished with eight points.