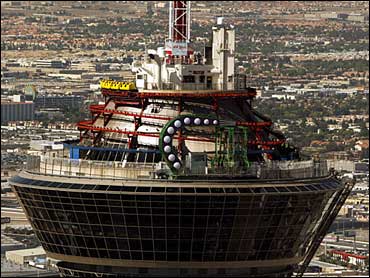 The ride extends a curved arm from a tower platform and spins up to 10 passengers around on seats suspended at the end of mechanical fingers.

Gabriella Ceniceros, 11, and her cousin Erica McKinnon, 19, of Las Vegas, were the only passengers on the ride when it stopped about 12:45 a.m. They remained suspended about 900 feet above Las Vegas Boulevard until workers pulled the arm back to the platform about 2 a.m. and rescued them.

The two were unharmed.

"The ride started rocking, and they still continued the ride for awhile," McKinnon told The Early Show co-anchor Julie Chen Thursday. "And eventually it just ended up stopping."

"It was scary, because I kept thinking the ride was gonna fall," Ceniceros

"The wind was so strong," McKinnon added, "(workers) were trying to yell to us, and we couldn't hear anything. It was really scary."

Hotel officials said the ride is designed to go into "pause mode" when high winds are registered.

"The Insanity ride operated exactly as designed," Bobby Ray Harris, Stratosphere hotel-casino general manager, said in a statement. But, "We cannot anticipate sudden changes in the weather. Our personnel responded immediately, as trained, yet it took longer than we anticipated."

Wind gusts were clocked as high as 55 mph late Tuesday atop the Stratosphere tower, which is more than 1,100 feet tall and resembles the Space Needle in Seattle.

The Stratosphere is the tallest structure west of the Mississippi River.