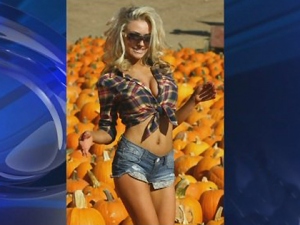 (CBS/KCBS) SANTA CLARITA, Calif. - Families visiting a Southern California pumpkin patch for a wholesome Halloween outing recently got an eyeful that they weren't counting on, and many of them weren't happy about it.

According to CBS station KCBS, Courtney Stodden, a 17-year-old aspiring country singer with a penchant for self-promotion, was there making out with her actor-husband Doug Hutchison, and posing for provocative pictures, before law enforcement was called and kicked the couple out.

The Lombardi Ranch pumpkin patch in Santa Clarita, a city in Los Angeles County, was teeming with parents and children Saturday, who happened upon the highly non-traditional Halloween "activities."

"I'm stunned -- I can't even believe that anyone would bring that type of behavior in here with all these children," one local mother told KCBS.

"How disgusting! I mean, this is a nice, family place. I've been coming here since I was born," said Santa Clarita resident Renee Powers. "It's a family place...not a sleazy pumpkin patch."

On Saturday, before the revealing photo shoot, Stodden posted on Twitter, "Ready to hit the hot & heavy hay this afternoon in preparation for Halloween..."

The shots, later splashed all over the internet, feature the aspiring reality TV star in a pair of Daisy Duke shorts and a flannel top revealing her midriff and cleavage.

So many families were distracted by Stodden and her behavior that the ranch's management asked her and her 51-year-old husband to leave. When they refused to do so, the California Highway Patrol was called, and they forced the couple off the pumpkin patch, KCBS reported.