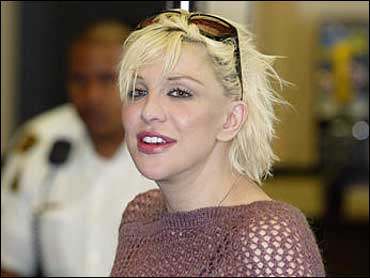 A trial date has been set for Sept. 30 for Courtney Love, who faces two felony drug charges for illegal possession of painkillers.

Love, 40, remains free on her own recognizance.

The rock singer arrived in court Monday wearing a purple knit top over a black halter and black heels. She fidgeted in her chair during the 10-minute hearing before Superior Court Judge Elden S. Fox.

When he asked whether the trial date was acceptable, Love initially replied, "I don't know." She agreed to the date after consulting with her lawyer and thanked the judge before leaving.

Love could face up to three years and eight months in prison if convicted on both charges of possessing oxycodone and hydrocodone.

She faces a separate assault felony charge for allegedly attacking a woman with a liquor bottle April 25 at her ex-boyfriend's home in Los Angeles. Her arraignment in that case is scheduled for Friday.

In July, she was also sentenced to 18 months in a drug rehabilitation program after pleading guilty to being under the influence of a controlled substance, a misdemeanor charge connected to an alleged break-in at the same ex-boyfriend's home last fall.

Police called to her home hours after that arrest allegedly found painkillers there, leading to the felony drug charges.

She also faces charges of assault and reckless endangerment in New York City for allegedly striking a fan with a microphone stand at a nightclub in March.

Love, the widow of Nirvana singer Kurt Cobain, was formerly the lead singer of the band Hole. She had to delay a concert tour with her new band this year because of her legal problems.