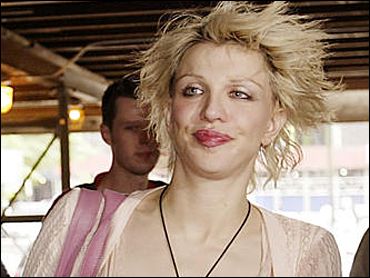 Troubled rock star Courtney Love got a bench warrant for her 40th birthday after failing to appear Friday at her arraignment on an assault charge. Her lawyer said she was in the hospital in New York City.

As KCBS reporter Jennifer Davis reports, Love's defense attorney Michael Rosenstein told reporters immediately after the California hearing that he had spoken with Love the night before in New York.

"By the time I spoke with Courtney last night, it was all ready well into the late evening in New York time and I just presumed she didn't have an opportunity to get on a flight. I haven't spoken with her today, she knew the necessity to be here and she's not, and she will have to face the consequences of not being here."

Hours later, however, Rosenstein said she was in a New York City hospital with a gynecological problem.

"It is not a suicide attempt, not drug-related, not drug-overdose related," attorney Rosenstein said. "It's a gynecological medical condition for which she is receiving treatment.

"This is all third-hand, I have not spoken with her since last night, when she complained of medical problems, had not seen doctor and as a result the situation was exacerbated."

Earlier, Rosenstein had told a Los Angeles court Love was in New York City and confused about whether she was required to be in Los Angeles.

Court Commissioner Dennis E. Mulcahy said there was no excuse for her failure to appear. He said she forfeited her $55,000 bail and he set a new bail of $150,000.

Love, former lead singer of the band Hole, has coast-to-coast legal troubles and has had to reschedule a summer tour to support her new album, "America's Sweetheart."

She was scolded by a judge last month when she showed up more than five hours late to a Manhattan court for a hearing on charges of assault and reckless endangerment for allegedly hitting a fan with a microphone stand in the East Village in March. She's due back there Sept. 7.

Love was supposed to have been arraigned in Los Angeles on a charge of assault with a deadly weapon for allegedly attacking a 32-year-old woman with a liquor bottle.

The charge involves an April 25 incident at the home of former manager and ex-boyfriend Jim Barber.

Love, widow of Nirvana singer Kurt Cobain, also was charged in two cases stemming from encounters with police on one night last October.

Authorities said cocaine and other opiates were found in Love's system after she was arrested for allegedly trying to break into Barber's home. She pleaded guilty to a misdemeanor drug charge and agreed to enter a drug rehabilitation program.

She is also facing a felony case in Beverly Hills Superior Court for alleged illegal possession of prescription painkillers. Love allegedly gave officers a small bag of pills after they responded to a call from her home hours after her initial October arrest.