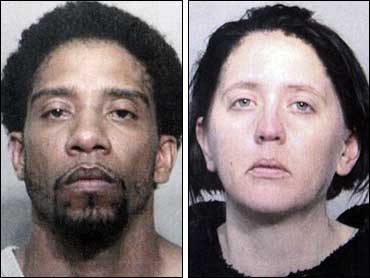 A fugitive couple accused of killing a prison guard during a daring courthouse escape were indicted on first-degree murder charges and could face the death penalty, prosecutors said Thursday.

Morgan was killed in the Roane County Courthouse parking lot in Kingston, about 30 miles (48 kilometers) west of Knoxville, as he escorted George Hyatte from a hearing in the courthouse to a van to take him back to prison.

Harris emptied his revolver, then used his dying partner's gun, firing 11 shots at the fleeing couple. Jennifer Hyatte was wounded but the two made their getaway.

The Hyattes were caught 36 hours later in a budget motel in Columbus, Ohio after the cab driver who drove them to the city called police. Then U.S. marshals brought the Hyattes to Tennessee from Columbus, Ohio, where they have been held since their arrests Aug. 10. More than 40 officers, some with shotguns and several wearing bulletproof vests, surrounded the county jail when marshals pulled up with the Hyattes and several police cruiser escorts.

At that time, Sheriff David Haggard said, "It is a relief to have those people back and in custody, because where they are at now they are not going to cause anybody any trouble."