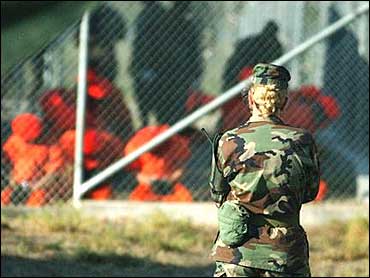 The Supreme Court said Thursday it will not allow a potential breach in the isolation of terrorism suspects at the Navy base in Cuba, at least until the justices decide whether to hear another legal challenge to treatment of the foreigners held there.

The full court granted a request from the Bush administration to stop a lower court from communicating with a detainee at Guantanamo Bay, Cuba. The action underscored a temporary reprieve granted by a single justice, Sandra Day O'Connor, last week.

The 9th U.S. Circuit Court of Appeals was poised to notify the detainee of that court's ruling in December that Guantanamo prisoners should be allowed to see lawyers and have access to courts.

The Supreme Court granted the government's request to put that ruling on hold, at least until the Bush administration files a full appeal in the case of detainee Falen Gherebi.

Solicitor General Theodore Olson had asked the high court to block any developments in Gherebi's class-action lawsuit over treatment of the Guantanamo detainees.

The case could be affected by the Supreme Court's ruling, expected later this year, in a separate case that asks whether Guantanamo detainees may contest their captivity in American courts.

The Supreme Court announced in November that it would consider appeals on behalf of Guantanamo inmates. A month later, a panel of the 9th Circuit issued the ruling in favor of Gherebi, a Libyan captured in Afghanistan.

The Supreme Court could now hear the Gherebi case as well, hang onto it until it rules in the separate challenge, or reject the government's appeal and allow the ruling of the San Francisco-based appeals court to stand.

The government has been holding about 650 men, mostly Muslims, essentially incommunicado at the prison in Cuba. The administration maintains that because the men were picked up overseas on suspicion of terrorism, they may be detained in open-ended military custody, without charges or trial.

Last week, the U.S. military released three teenage boys — believed to be between the ages of 13 and 15 — who had been accused of supporting the Taliban and had been held at the prison

In asking the high court to step in, Olson argued that national security is at stake.

Communication with the prisoner would "interfere with the military's efforts to obtain intelligence from Gherebi and other Guantanamo detainees related to the ongoing war against terrorism," Olson wrote in an emergency filing last week.

The administration has made similar arguments in other terrorism cases.

In the trial of alleged Sept. 11 conspirator Zacarias Moussaoui, the Justice Department has refused a judge's order to allow Moussaoui to question suspected al Qaeda members in detention.

And in cases concerning three men labeled "enemy combatants," the government has argued that national security concerns require that it hold the men without lawyers, without charges and indefinitely.

The Supreme Court is reviewing one of the enemy combatant cases as well.