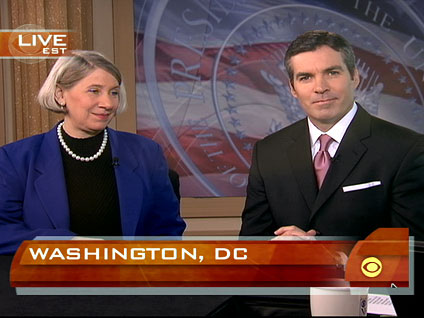 At issue is the scope of the Fifth Amendment, which allows governments to take private property through eminent domain, provided the owner is given "just compensation" and the land is for "public use."

Susette Kelo and several other homeowners in a working-class neighborhood in New London, Conn., filed a lawsuit after city officials announced plans to raze their homes to clear the way for a riverfront hotel, health club and offices. The residents refused to budge, arguing it was an unjustified taking of their property.

They argued the taking would be proper only if it served to revitalize slums or blighted areas dangerous to the public.

New London contends the condemnations are proper because the development plans serving a "public purpose" — such as boosting economic growth — are valid "public use" projects that outweigh the property rights of the homeowners.

The Supreme Court also agreed Tuesday to consider whether foreign cruise lines sailing in U.S. waters must comply with a federal disabilities law requiring better access to passengers in wheelchairs.

The case seeks to determine what Congress intended when it passed the landmark American Disabilities Act in 1990 barring discrimination against the disabled in the enjoyment of services in places of "public accommodation."

The Connecticut Supreme Court agreed with New London, ruling 4-3 in March that the mere promise of additional tax revenue justified the condemnation.

Nationwide, more than 1,000 properties were threatened or condemned between 1998 and 2002, according to the Institute for Justice, a Washington public interest law firm representing the New London homeowners.

In many cases, according to the group, cities are pushing the limits of their power to accommodate wealthy developers. Courts, meanwhile, are divided over the extent of city power, with seven states saying economic development can justify a taking and eight states allowing a taking only if it eliminates blight.

"The record is clear that New London was a city desperate for economic rejuvenation," the city's legal filing states, in asking the high court to defer to local governments in deciding what constitutes "public use."

Eight states forbid the use of eminent domain when the economic purpose is not to eliminate blight; they are Arkansas, Florida, Illinois, Kentucky, Maine, Montana, South Carolina and Washington.

Another three — Delaware, New Hampshire and Massachusetts — have indicated they probably will find condemnations for economic development alone unconstitutional, while the remaining states have not addressed or spoken clearly to the question.

Disabled groups, who boarded a Norwegian Cruise Line in Houston in 1998, say they weren't given adequate access to ship pools, restaurants and emergency equipment. In other situations, they alleged they were forced to pay additional fees for wheelchair accessible rooms, inhibiting their rights to "participate fully in society."

Norwegian Cruise Line counters that only an express statement of Congress can justify imposing the U.S. law on a ship that sails under a foreign flag, even if it is docked at a U.S. port. The federal law is silent as to whether foreign cruise lines are covered by the ADA.

"This well-established principle of maritime and international law prevents unintended clashes between port states and flag states over the governance of oceangoing ships," Norwegian's filing states.

The case has wide implications for the cruise industry, which could be forced to spend millions of dollars to remodel ships. The International Council of Cruise Lines filed a friend of the court brief in support of Norwegian Cruise Line, while several advocacy groups joined in a brief for the disabled plaintiffs.

In other action Tuesday, the high court agreed to hear an appeal involving an amateur radio operator who says the city of Rancho Palos Verdes, Calif., unjustly denied him a permit to use a radio antenna for commercial purposes.

At issue is whether the federal Telecommunications Act of 1996 provides for money damages from city officials in cases of violations, or simply a court order requiring the city's compliance. The 9th U.S. Circuit Court of Appeals ruled the radio operator was entitled to compensation.

The Supreme Court also agreed Tuesday to hear a case in which a disgruntled former client of famed defense lawyer Johnnie Cochran contends he was improperly ordered to stop picketing outside Cochran's office.

The Supreme Court said it would hear an appeal from Ulysses Tory, who argued he had a First Amendment right to picket outside Cochran's Los Angeles office to complain about the attorney's services.