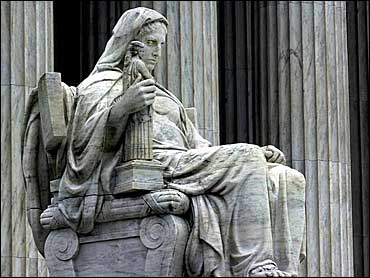 The Supreme Court made clear Tuesday that it will soon decide if it is constitutional to execute mentally retarded killers, substituting a moot North Carolina inmate's case with one from Virginia.

The court's first choice had been the case of Ernest McCarver, but before arguments could be heard, North Carolina passed a law banning such executions.

In other action Tuesday, the Supreme Court:

In the death penalty case, justices swapped the McCarver case with one involving a Virginia man who robbed and killed an airman.

The North Carolina law was passed in July, four months after the high court stopped McCarver's execution after he had eaten what was supposed to be his last meal. The Supreme Court dismissed McCarver's appeal.

Justices had two other cases to choose from — an Alabama triple killer and a Missouri man who, as a teen-ager, raped and helped kill two young women.

Instead, the court decided to consider the appeal of Daryl "James" Atkins, who was convicted of murdering an airman in 1996 because he needed money for beer. He was 18 at the time.

The airman, 21-year-old Eric Nesbitt, was kidnapped outside a convenience store and forced to withdraw money from an automatic teller machine. Atkins and an accomplice took Nesbitt to a deserted field and shot him eight times. Nesbitt was stationed at Langley Air Force Base in Hampton, Va.

In March, the Supreme Court decided to use McCarver's case to revisit the question of whether it is unconstitutionally cruel and unusual punishment to execute a person with mental retardation.

McCarver was sentenced to death for the 1987 murder of cafeteria worker Woodrow Hartley. Defense experts testified McCarver's IQ is 67, though prosecutors said it was higher.

North Carolina enacted a ban on executing those with IQs of 70 or less. The law gives current death row inmates a chance to prove their retardation.

Eighteen states and the federal government have some kind of ban on those executions.