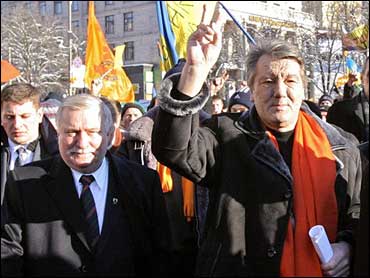 Ukraine's Supreme Court gave the political opposition some breathing room Thursday, ruling that the results of a presidential election are not official until it hears an appeal from a Western-leaning candidate who says it was stolen from him.

But there were no indications that opposition leader Viktor Yushchenko's call for a national strike was taking hold, and it was unclear whether the high court even has the right to annul the vote count that gave victory to the Kremlin-backed candidate, Prime Minister Viktor Yanukovych.

The election pitting Yushchenko against Yanukovych has led to an increasingly tense tug-of-war between the West and Moscow, which considers Ukraine part of its sphere of influence and a buffer between Russia and NATO's eastern flank.

At a summit in The Hague, Netherlands, Russian President Vladimir Putin and European Union leaders staked out starkly opposing views of Ukraine's election dispute but agreed the crisis must be resolved peacefully.

Although Yanukovych had widespread official backing, including that of outgoing President Leonid Kuchma, the Supreme Court is respected as an unbiased body. CBS News Correspondent Richard Roth reports that the court's decision thrilled Ukrainians, who have flooded the streets of Kiev - protesting the election they say was hijacked.

"Yeah, we are definitely going to win," said Valentyn Kulchytsky, 23, one of about 100,000 demonstrators standing in freezing weather.

Yushchenko praised the decision, but told the crowd, "This is only the beginning." Meantime, he's told his supporters to keep up the pressure.

The court decision also foretells a continuation of tension for at least several days. The appeal will be considered on Monday, court spokeswoman Liana Shlyaposhnikova said.

The protesters, swelling to as many as 200,000 at times, have braved freezing temperatures in Kiev's Independence Square since Sunday's run-off, saying the ballot was rigged to allow Yanukovych to win.

An approximately 100-strong unit of men in police uniform went over to the protesters' side on Thursday night, and the Unian news agency described them as cadets. As one of them read a statement of support, the crowd shouted "Good guys!"

The demonstrators were galvanized Thursday by a visit from Lech Walesa, the founder of the Polish Solidarity movement, who said he was "amazed" at their enthusiasm and predicted their protest would succeed.

Walesa, who arrived in Kiev to try to help pull this deeply divided nation of 48 million back from the brink of conflict, said he met earlier with Yanukovych, "not as a presidential candidate but as prime minister."

"I am worried that all the people I talked with stressed that there is a possibility of provocations, and if you have a provocation then force must be used," Walesa said later, but added nonetheless that "I am leaving with some hope."

Roth reports that Russia condemns this protest as a challenge to legitimate authority in Ukraine -- just as the United States and Europe paint it as an outpouring of democratic hopes.

Western observers have denounced the vote as fraudulent, citing voter intimidation, multiple voting and other irregularities. The United States and the European Union said they couldn't accept the results as legitimate and warned the Ukrainian government of "consequences" in relations with the West.

The stakes for both Moscow and the West are substantial.

Ukraine's Black Sea port of Sevastopol is home to the Russian navy's southern fleet, and the country is seen as a buffer between Russia and eastward-expanding NATO. In addition, pipelines carrying Russian gas and oil Russia's major export earners cross Ukraine.

As for Moscow's own international prestige, any prospect of even partially resurrecting the Soviet Union, such as through free-trade zones, depends on Ukraine's allegiance to Russia.

The West has interests beyond furthering democracy.

If one of Europe's largest countries turns violent, the waves of unrest will be felt far from Kiev, and waves of Ukrainian migrants could pour into neighboring European Union countries. Although Ukraine has given up its nuclear missiles, there are still fears it could play a role in proliferating weapons of mass destruction.

The outcome could have a significant impact on other former Soviet republics such as Belarus, where authoritarian President Alexander Lukashenko has been granted the right to run for office indefinitely. An opposition victory would reinforce the message of last autumn's Rose Revolution in Georgia that protests can bring down post-Soviet governments.

The Western-leaning reformist Yushchenko and his allies had called for an "all-Ukrainian political strike" starting Thursday.

The threat to shut down factories, schools and transportation risked provoking a crackdown by Kuchma, who accused the opposition of trying to carry out "a coup d'etat."

However, there were no indications that a national strike was taking hold, although workers from several factories in Yushchenko's stronghold region of Lviv were reportedly leaving their jobs to come to Kiev. In the capital, business and factories appeared to be working as usual, although one hotel allowed its workers to take leave to join the protests.

The private One Plus One TV channel went on the air for the first time since Tuesday, promising there would be no censorship there from now on.

"We acknowledge our responsibility for biased information that the channel spread under pressure and according to directions from various political forces," the channel's journalists said.

Mykola Tomenko, a lawmaker and Yushchenko ally, said "more and more people" were gathering on the streets of the nation's cities. The opposition said some roads had already been blocked and workers had gone on strike, but there was no way of independently verifying the claims.

A strike could further divide the country: Yanukovych drew his support from the pro-Russian, heavily industrialized eastern half of Ukraine, while Yushchenko's strength was in the west, a traditional center of nationalism.

Yanukovych is seen as likely to bring Ukraine closer to its eastern neighbor, perhaps giving short shrift to the NATO and EU countries that border Ukraine's west. Yanukovych has also proposed making Russian an official language, a popular idea in Ukraine's eastern regions where many Russian-speaking residents struggle with Ukrainian.

Yushchenko campaigned on promises of economic development, including a grandiose promise to create 5 million new jobs in the country; battling the corruption that keeps wealth concentrated in a few hands despite the country's recent economic upswing; and reducing and simplifying taxes.