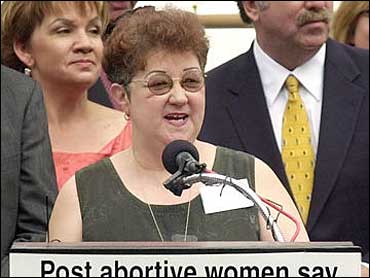 A federal district court dismissed a request by the one-time plaintiff known as "Jane Roe" to reconsider the landmark U.S. Supreme Court decision that legalized abortion 30 years ago.

The court said late Thursday that Norma McCorvey's request wasn't made within a "reasonable time" after the 1973 judgment in Roe v. Wade.

McCorvey, who joined the anti-abortion rights fight 10 years ago, filed the "motion for relief from judgment" Tuesday, asking the court to reopen the case and conduct a wide-ranging inquiry into scientific and anecdotal evidence that she says shows abortion hurts women.

"Whether or not the Supreme Court was infallible, its Roe decision was certainly final in this litigation," Judge David Godbey wrote in the ruling. "It is simply too late now, thirty years after the fact, for McCorvey to revisit that judgment."

McCorvey's attorney, Allan Parker, said his client will likely ask the court to reconsider its ruling. "This is not a case of newly discovered evidence, which must be brought in a short amount of time. It's a case of changed factual conditions and law," he said.

Sarah Weddington, the pro-abortion rights activist and attorney who originally represented McCorvey, said she was delighted but not surprised that McCorvey's request was dismissed.

"It never should have been filed," Weddington said Friday. "Those who filed it got publicity, but the publicity actually has been very helpful for those of us who believe the government should not be involved."

Weddington said she has received about two dozen e-mails from people offering to help defend the Roe v. Wade decision.

Federal law allows litigants to petition the court to reopen cases in extraordinary situations, but such requests must be made weeks or months after the judgment, not decades, Godbey wrote.

McCorvey and her attorneys asked the federal court to consider more than 5,400 pages of evidence, including 1,000 affidavits from women who regret their abortions, in re-evaluating the Supreme Court's decision.

The Supreme Court decision came after McCorvey had her baby. It was the third child McCorvey put up for adoption; she was a 21-year-old carnival worker at the time.

McCorvey publicly identified herself as Jane Roe in 1980. After converting to Catholicism, she shocked the pro-abortion rights community in 1995 by joining the anti-abortion rights activist group Operation Rescue.

On her website, McCorvey portrays herself as a "helpless pawn in a powerful game" and faults her lawyers for manipulating her into becoming an advocate for abortion rights.

She says she has gone from telling a reporter, "This issue is the only thing I live for. I live, eat, breathe, think everything about abortion," to declaring she is "one hundred percent sold out to Jesus and one hundred percent pro-life."