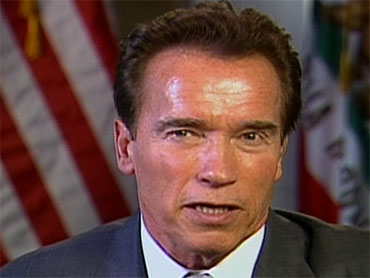 A California appellate court on Friday sided with Gov. Arnold Schwarzenegger administration in his attempt to impose the federal minimum wage on tens of thousands of state workers.

It was not immediately clear how the ruling would affect Schwarzenegger's order a day earlier to pay 200,000 state workers the federal minimum of $7.25 an hour as the state wrestles with a budget crisis.

The state controller, who cuts state paychecks, has refused to comply with the order. The office declined to comment because it is still reviewing the ruling.

Friday's ruling affirms a lower-court ruling in favor of the administration in a lawsuit filed two years ago after the governor's first attempt to impose the minimum wage.

The ruling comes as 46 states are now in their new budget year and are collectively $140 billion in the hole, reports CBS News correspondent Ben Tracy. In addition to California, Illinois has a $13 billion shortfall, New Jersey $11 billion and almost $9 billion in New York. States are still reeling from lower tax revenues due to the recession, and federal stimulus funds, which kept many states afloat, are now gone.

The latest ruling from the California 3rd District Court of Appeal in Sacramento concludes that state Controller John Chiang cannot ignore the minimum wage order from the state Department of Personnel Administration.

It says, " ... the DPA has the authority to direct the controller to defer salary payments in excess of federally mandated minimum wages when appropriations for the salaries are lacking due to a budget impasse ..."

The Republican governor issued the order this week on the first day of the new fiscal year because the state remains without a budget, as lawmakers remain far apart on ways to close California's $19 billion deficit.

Schwarzenegger on Thursday ordered the state workers to be paid minimum wage this month because the state legislature has not passed a budget.

Department of Personnel Administration Director Debbie Endsley sent the order in a letter to Chiang, who refused a similar order two years ago.

Most state employees will be paid the federal minimum of $7.25 per hour for the July pay period.

Schwarzenegger spokesman Aaron McLear said Thursday the change should be reflected in state employees' next paycheck. Workers will be paid in full retroactively once a budget is passed.

"It's a sad day when the boss wants to make his employees collateral damage in a budget dispute," said Patty Velez, an environmental scientist and president of the California Association of Professional Scientists, a union that would be affected by the cuts.

The Republican governor has been frustrated by the Legislature's failure to close California's $19 billion budget deficit, even as the new fiscal year began Thursday.

Schwarzenegger's order does not affect the 37,000 workers, including California Highway Patrol officers, who are in unions that recently negotiated new contracts with the administration. Those contracts included pay cuts and pension reforms that will save the state money.