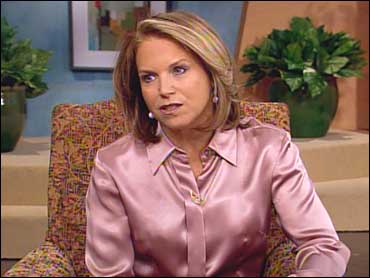 Katie Couric has led efforts to make the public aware of the importance of colon cancer screenings ever since her husband, Jay Monahan, died from the disease in 1998.

The CBS Evening News anchor continued her efforts as The Early Show and her broadcast kicked off a special, five-part series, "Conquering Colon Cancer."

On The Early Show Wednesday, Couric

stressed (video)
to co-anchor Harry Smith that people need to "get over" any embarrassment they associate with colonoscopies, and undergo the test considered the gold standard in colon cancer detection.

Smith told Couric his own, first colonoscopy was over so quickly, he didn't even have time to watch it on a monitor, as he had intended to!

According to the American College of Gastronterology, "Colorectal cancer is the No. 2 cancer killer in the United States, affecting men and women equally. The American Cancer Society estimates 153,760 Americans will be diagnosed with colorectal cancer this year, and 52,180 will die from the disease."

It's curable 90 percent of the time when detected early.

Physicians recommend that you start getting screened at age 50, and earlier under certain circumstances.

Couric is a founder of the National Colorectal Cancer Research Alliance (NCCRA), whose Web site says "is dedicated to the eradication of colorectal cancer by promoting the importance of early medical screening and funding research to develop better tests, treatments, and ultimately a cure."

In March 2000, Couric got a colonoscopy -- on the air. She went through every step of the procedure in a now-famous segment that aired on "The Today Show." Experts say her honest portrayal of the process and her feelings about it did wonders to persuade people that they, too, should get screened.

"I just knew so many people were in the dark when it came to colonoscopies," Couric explained to Smith. "They had never heard of a colonoscopy. They didn't really know what it entailed. And I thought, if I could remove some of the stigma, and show people the procedure is really quite easy, and it's a lot easier than a diagnosis of colon cancer. … There is so much misinformation, quite frankly, ignorance out there that I thought I could really shed some light.

" … I always say, I don't want anyone to die of embarrassment. And, you know, basically – get over it!"

With screening and early detection, many of these deaths are preventable.

Couric is hardly the only celebrity pushing colon cancer awareness.

The NCCRA and the CDC have joined forces in a public service announcement campaign entitled "Screen for Life." It's designed to inform men and women over 50 that it's critically important to to have regular colorectal screening tests. Among the participating celebs: Diane Keaton, Morgan Freeman, Dennis Quaid, and Ray Romano.

The newest PSA features actor Jimmy Smits, who explains why screening for colorectal cancer is important and how getting screened can help prevent the disease. He says, "I've been screened. Now it's your turn."

Most colon cancers result from polyps -- abnormal growths in the colon. When detected, the polyps can be removed before they develop into cancer. Screening tests can find colorectal cancer early, when treatment works best.

The test most often recommended to screen for colorectal cancer is the colonoscopy. It's generally recommended that you start getting the test at age 50 and repeat it every 10 years, more frequently if you have had colon polyps of colon cancer previously. Those with a family history of the disease should begin colonoscopies at 40 years old, according to the American College of Gastroenterology.

One impediment is that some insurance companies refuse to cover the cost of a colonoscopy, putting it financially out of reach for many individuals. Colonoscopies typically range between $600 and $3000, which includes both the physician's fee and the facility fee.

Twenty-one states have passed legislation requiring insurance companies to cover the test, and the push is on to get more states on board.

The Poetry Of Alicia Keys