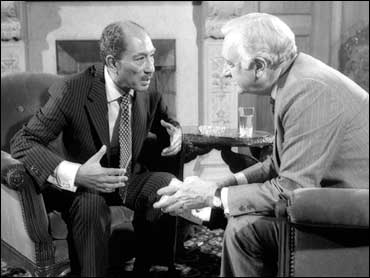 The rich baritone that was Walter Cronkite's voice can be heard each weeknight in a recording saying, "This is the 'CBS Evening News with Katie Couric."'

"When he agreed to do the announce before the 'Evening News' commences every night, you know, everyone was so grateful and appreciative," Couric said on "The Early Show Saturday Edition" the morning after Cronkite died at the age of 92.

Anchoring the same broadcast Cronkite did for so long is "a thrilling opportunity for me," Couric said, admitting, "I feel at times woefully inadequate, especially now listening to all the stories about Walter.

Special Section: Walter Cronkite: 1916-2009
"You know, I met him on several occasions. He was kind enough to take me out to dinner the summer before I started at CBS News. He was, as everyone has been saying ... a truly wonderful man, an American icon. ... I don't think there will ever be anyone like Walter Cronkite. And if I could do one quarter of the job that he did on the 'CBS Evening News,' I'd be very proud of my work. So that just shows how tremendously influential and important he was and continued to be, even after he left the anchor chair.

"He set a standard for all of us. ... As sad as it is ... that Walter has passed away, I think this opportunity to celebrate his legacy and his accomplishments is really an important opportunity for all of us, because I think, sometimes, the standards of journalism have been challenged.

"Certainly, journalism itself is a very different animal than it was in terms of how fragmented it is (compared to) when Walter was sitting in the anchor chair. But, his spirit lives on in a very palpable way in the hallways of CBS. And his honor and integrity and decency, his -- he always cared about accuracy intensely, and sourcing and, you know, he was the dean of television journalism for so long. And for me, it's just a daily reminder about how important it is to really embody all of the qualities, or at least attempt to embody, all the qualities that he exemplified."

Couric said Cronkite "really guided the ship in so many ways. ... He did a piece on Watergate, and it was 14 minutes long, which was just unheard of, which was a very strong message to the American people that this wasn't The Washington Post just out to get (former President Richard) Nixon. This was truly an important story. And I think he made decisions like that all the time.

"Morley Safer told us that he was a reporter's best friend when a reporter was out in the field. He really did guide this genre and this broadcast called the 'CBS Evening News,' and is responsible for making it such a long-lasting creature in television journalism.

"And I think he did it in the best possible way. ... He wanted to have authority over the what went into the news, the content, the visuals that were used, and I think that was critically important for everyone who followed in his footsteps."