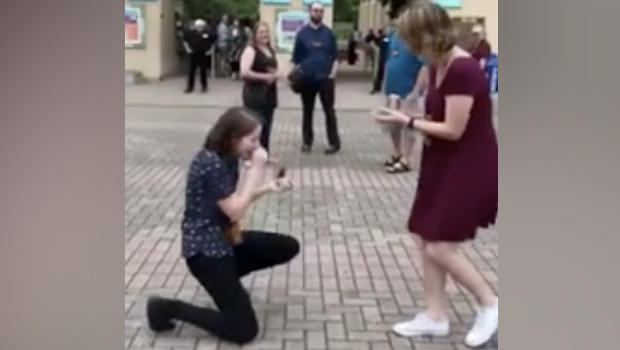 They both liked it, so they both put a ring on it. When one Tennessee couple went to the Memphis Zoo on Friday, they each had a secret plan to pop the question.

The Memphis Zoo is a special place for Becky McCabe and Jessa Gillaspie, because they'd gone their on their first date. When they went there with friends on Friday, McCabe had arranged for one of their pals to videotape the proposal.

The couple, surrounded by their friends, posed for a photo in front of the zoo. As one friend took their picture, another friend began filming in anticipation of the big moment.

After one photo, McCabe asked, "Can we get a candid one, like talking?" The couple broke their pose and began to take a more casual photo. They kissed, then McCabe turned to Gillaspie.

McCabe held a ring behind her back and told Gillapsie she loved her. Then, dropping to one knee, she opened the ring box and asked "Will you marry me?" The whole time, Gillaspie cried tears of joy.

But instead of answering the question, Gillaspie turned around, grabbed her purse, and started digging around for something.

"Oh my God!" she exclaimed.

"What are you doing?" one of the couple's friends asked. Finally, Gillaspie pulled out another ring box.

McCabe, still down on one knee, immediately began laughing. Gillaspie had planned all along to propose to her, too.

Gillaspie opened the ring box and showed McCabe the ring she had planned to propose with — before McCabe beat her to the punch.

It was a coincidence that neither was prepared for, but one that thrilled them both.

"I had no idea she planned to propose, and she had no idea I planned to propose to her! We were both so surprised!!!! We were surrounded by our friends and had the most amazing night. I am the luckiest girl in the world to be able to call her my fiancée," the caption to the video, which as been viewed nearly 200,000 times, reads.

"We had no idea this would blow up so quickly!" Gillaspie wrote after the video went viral. "But I can't say I'm not thrilled, because all I've ever wanted was for Beck and the world to know how much l love her."

Not many couples can say they are so in sync that they both have the idea to propose at the same time and place. The happy couple says they hope to get married next summer, local media reports.