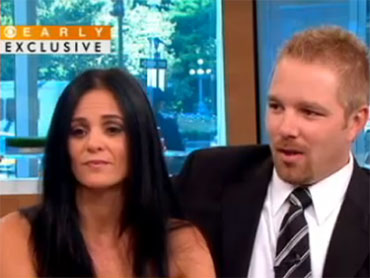 Your wedding is supposed to be one of the happiest days of your life, but for one Arizona couple, it turned into a near-nightmare.

Tina and Nate Herd hired a wedding planner to book a dream wedding last weekend at a beautiful Utah ski resort. Not living in the area where the wedding was to be held, they needed someone on the ground to take care of the details. But when they arrived, they found a disaster. As it turns out, they say, nothing had been paid for because the wedding planner ran off with $30,000. She's been arrested.

On "The Early Show" Thursday, Tina and Nate Herd shared their story.

The Herds, who did follow through with their wedding, said they found their wedding planner online. Her references, they said, were glowing.

Tina said she read "wonderful things," such as, "'She does a great job, she's always on time."'

Nate added, "(Reviews said) 'We had a perfect wedding. We had no problems. We highly recommend her.'"

The Herds eventually met with the wedding planner and developed a close relationship with her. They even exchanged Christmas presents.

Nate said, "Went to her house and met her family, her kids."

Throughout the planning process, the Herds say, they didn't suspect her - until at the end, when Nate says, "She changed."

He explained, "The more we tried to do, the worse it got and the harder it was, so, we kind of had to stick it out."

The couple gave the planner a check up front. By the end, they had forked over $30,000.

And the couple says she didn't act as if anything was out of the ordinary.

The Herds told "Early Show" co-anchor Erica Hill the wedding planner met them at the The Canyons Resort in Park City, Utah, where the wedding was to be held.

"She gave us presents, she saw my dress," Tina said. "She saw our vows."
Nate said, "She came in, like she was our best friend, like everything was moving forward and she was happy and couldn't wait for the wedding."

Nate said, "She left and we actually went to get something to eat and Tina's phone rang. It was the vice president of The Canyons and he says, 'I'm here with our wedding coordinator and with our attorney.' We have a big problem with your coordinator, and it's going to affect your wedding. Can you come back?' So, we got the instant wrench in our stomach, turned around and drove back. We walked in. They sat us down and he looked at her and he says, 'You've been scammed, as of right now, nothing from your wedding has been paid for. The entire balance was paid with a stolen credit card." '

Tina said she thought she was being filmed for a TV show.

"It was devastating," she said. "I was looking for a camera."

The couple had 200 family members and friends arriving the next day from around the country.

"Early Show" Consumer Correspondent Susan Koeppen sympathized with the couple, but said she's not surprised by this story.

She explained, "The wedding industry is a $74 billion industry. So, there's a lot of money to be made and a lot of people who want to cash in on weddings. … They did a lot of the right things. You should always do your homework, always check out people. Ask for references. And if you can, try to use people that your friends have used, your family has used, people that you know that have a really good long history, really good reputation. And, also, try to get a contract in writing. So, everybody is very clear about the expectations."

The wedding took place despite the debacle, but the couple is still left to pay $15,000 on top of the $30,000 they say they ost to their wedding planner. The Canyons agreed to only charge them the resort's cost to host the wedding. Hill pointed out the resort is working with the couple on a payment plan.

So how can people avoid this kind of situation?

Koeppen said, "If at all possible try to pay with everything with credit cards so that way if there is a scam or fraud you can dispute the charge with the credit card company and also try to make small deposits. Don't give all of the money up front. You need to make a deposit, of course, but then as the services come in, and you know things are guaranteed, and you are checking on things, you can give more money once you know the services are there and are going to be provided."

If there is some kind of irregularity or if you suspect money is stolen, Koeppen said you need to report it to law enforcement and the Better Business Bureau, so a record of the incident exists.