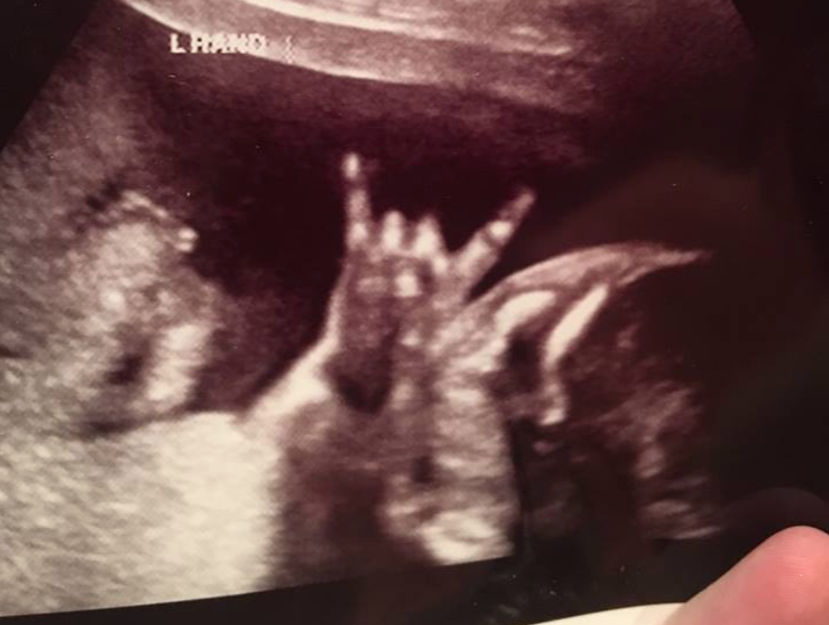 This couple’s baby isn’t even born yet, but it’s ready to rock ‘n’ roll -- as was made abundantly clear in the family’s latest ultrasound.

Makelle Ahlin and her husband, Jared, from Santaquin, Utah, were anxiously examining their baby’s features on the screen during an ultrasound last week when they saw something unusual: a hand that was flashing the “rock on” sign.

“My husband saw it first. He told the ultrasound tech to ‘go back’ as she was moving around,” Ahlin told CBS News. “He said, ‘We need a picture of that.’ He was so excited by what he had just witnessed.”

Ahlin couldn’t stop giggling at her husband’s priceless reaction, and the couple said they re-watched the video several times.

“The baby must be giving you a sign,” the female ultrasound technician told the mom- and dad-to-be.

The ultrasound technician was surprised at how much the baby moved for the future parents, but Ahlin said she wasn’t too surprised.

“I think the baby definitely likes music,” she joked. “I usually have music playing throughout the day at home -- I like the background noise so it’s probably a comfort thing.”

In fact, Ahlin says the first time the baby kicked she was listening to Edward Sharpe and the Magnetic Zeros and The Lumineers on Spotify.

“My husband prefers country music, and we often have dance parties to anything pop in the basement with our other two boys,” Ahlin said. “So the baby has listened to a wide variety of music and I feel as thought it enjoys it all.”

“I didn’t spend quite a bit of money on concerts in high school,” she said. “It’s so surreal to us, but we are loving on this little rockstar already!”

The couple also said they found out the sex of the baby during the ultrasound. They plan on announcing it to their family on Friday.