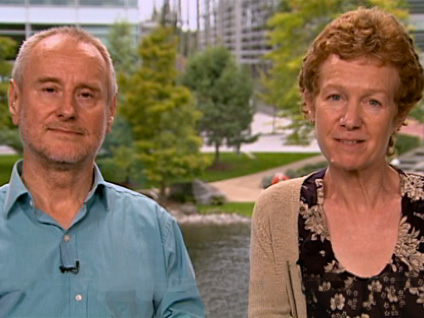 Two years ago, a British couple, Paul and Rachel Chandler were sailing near the southeastern coast of Africa when a crew of pirates kidnapped them, beginning an ordeal that lasted nearly 13 months.

The Chandlers' adventure of a long distance yacht cruise became an ordeal at the hands of Somali pirates. CBS News correspondent Mark Phillips reported the couple endured more than a year of captivity and long periods of separation, when each was unsure about the fate of the other.

Rachel Chandler told SKY News, "If I was with my husband, I'd feel a lot better. It's because I'm not with my husband that I'm feeling so lonely and desperate, and finding it difficult to sleep and carry on through the day."

The Chandlers had been in the Seychelles and were heading for Tanzania.

But in October 2009, their yacht was attacked and boarded by pirates.

They were forced to sail toward the Somali coast, to abandon their boat and were taken ashore where their long captivity began.

For sailors captured from large ships, captivity can go on for months until a ransom is paid. The Chandlers had no commercial sponsors and could only make desperate appeals.

Paul Chandler said, "I just want to say please to my government, get me and my wife out of here. We're innocent people and we've done no wrong. We have no money and we can't pay a ransom."

In the end, it's thought family and friends and Somalia expatriates in Britain scraped together the money to get the Chandlers freed and they were flown out to Kenya. They, unlike some others, are at least alive with a story to tell.

Paul and Rachel Chandler have recently released a book about their ordeal called "Hostage: A Year at Gunpoint with Somali Gangsters." They each wrote parts of the book separately, writing them like a diary telling their own stories.

On "The Early Show," co-anchor Erica Hill shared a recent interview with the Chandlers and asked them what it was like to learn these different details about their experience, including Rachel's thoughts of suicide.

Hill noted Rachel hasn't sought out counseling, hasn't had any nightmares. She told Rachel, "It sounds like you must be an incredibly strong woman to go through all of that."

Rachel said, "I think of myself as an ordinary person. But on the other hand, I suppose because we're cruising sailors, we have built up quite a resilience. And it took me -- it was a long journey for me. At first, I was a very amateur hostage. I was struggling all the time. But as time went on, I knew that I had to survive for Paul, for my family and friends. And somehow, I just kept going by thinking about them, especially."

Hill asked, "Was there ever a moment, Rachel, when you thought, this is how things may end for me, I could spend the rest of my life here, held hostage in Somalia?

"I certainly felt that, especially after our second separation," Rachel said. "And I really couldn't see any resolution because our captors kept demanding millions of dollars and I knew that we couldn't find that kind of money. But I suppose, always, I pulled myself out of it, thinking. that there has to be a solution. I have to keep hope. I have to keep going."

Paul said, "They morphed from being pirates to being kidnappers when they realize we were British. They thought there was a value in our citizenship. They had to go after that learning curve."

The couple is, amazingly, preparing to set sail again.

Hill said, "That, to most folks, would be unthinkable."

Rachel said, "I think to people who are not sailors and not cruisers, it's probably unthinkable. But all of friends have really encouraged us to get back to our lives. And for us, getting back to normal is going back cruising again. We love sailing, we love traveling, we love meeting people, and that, for us, is the life we want to lead."

"But you may avoid that Somali coast, I have a feeling," Hill said.